SEOUL, March 22 (Yonhap) -- The arms procurement agency on Monday denied a media report that the South Korean and British governments have begun informal talks on technology cooperation for aircraft carriers.

On Monday, the Daily Telegraph reported that the country's "advanced systems and designs" could be exported to South Korea, as its trade officials "have begun informal discussions with Korean counterparts about areas of technology the country could be interested in," citing industry sources.

The systems and designs were developed by British defense firms -- Babcock, BAE Systems and Thales -- and they were to apply to its Queen Elizabeth-class vessels, it noted.

"It is not true that we began informal discussion with the British government on the issue," Col. Suh Yong-won, spokesperson of the Defense Acquisition Program Administration (DAPA), said.

Another official said that South Korea is working to build a 30,000-ton-class light aircraft carrier, but it is not yet at the stage of selecting firms.

"There could be discussions among South Korean and British companies who are to join the project, but no such governments-level discussions have been made up until now," he said.

Seoul seeks to secure a 30,000-ton-class light aircraft carrier with its own technology to boost the country's defense capabilities. Commissioned by the Navy, Hyundai Heavy Industries Co. worked on its conceptual design. 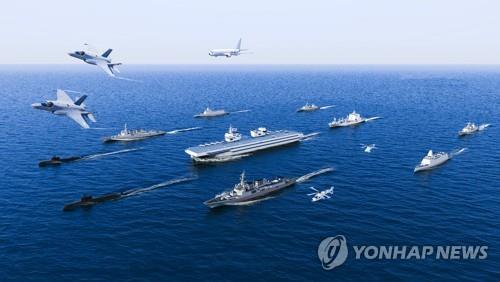