The 73-year-old violinist, dubbed the empress of the violin, was scheduled to perform at the Tongyeong International Music Festival, an annual classical music gala set to kick off in the southeastern city on Friday for a 10-day run, but she has canceled the plan.

An official from her agency said Chung began to develop problems in the index finger on her left hand in late February while practicing a lot in preparation for the Tongyeong music festival. 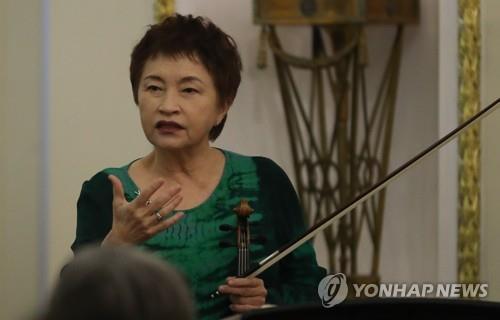 "If she went ahead with the planned performance, a surgery could be inevitable, so her performance in the Tongyeong festival has been inevitably called off," the official explained.

Chung is said to have recently visited a hospital and was asked to take four weeks of rest due to inflammation in the finger on her left hand.

The Tongyeong International Music Foundation, the organizer of the festival, also announced the cancellation of Chung's performance through social media, promising full refunds for all reserved tickets without a cancellation fee.

Chung was also to hold a solo recital in Namdong Sorae Arts Hall in Incheon on Saturday, but the concert was canceled on the day due to her injury.

Chung reportedly plans to devote herself to rest and rehabilitation without playing the violin for the time being.

She had stopped performing in 2005 due to her finger injury but resumed her activities in 2010.