In a joint interview with Yonhap News Agency and Yonhap News TV, Lee also expressed hope for the United States to support South Korea's push for such cross-border cooperation and urged North Korea to take an "open-minded" stance toward the South's offer of help.

As long as there is a social consensus and a need for humanitarian cooperation in the international community, Lee said the government should not hesitate to make efforts to provide assistance "as much as our capacity allows."

"As this year's budget includes funds for humanitarian and livelihoods-related cooperation with regard to food or fertilizer, I can say that we are ready at any time to cooperate with North Korea in a not-so-small and sizable manner," he said. 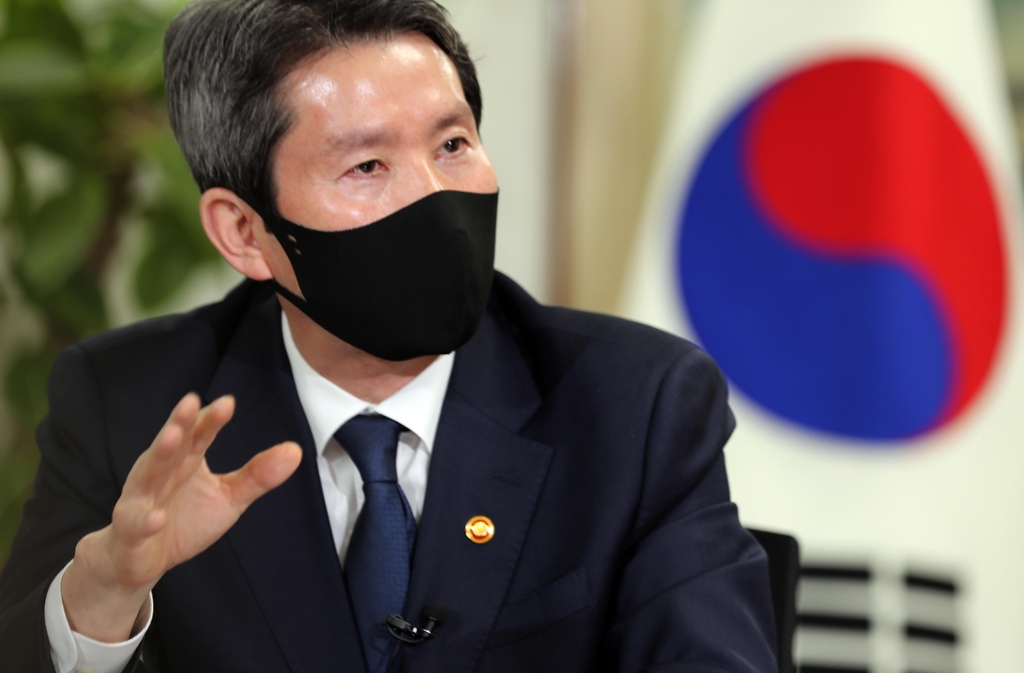 Lee called for the U.S.' support and North Korea's changed stance on the issue of cross-border exchanges in the humanitarian sector.

"If the U.S. supports our role with regard to humanitarian cooperation and the North also does not see it just as a non-fundamental matter and takes an open-minded stance, I believe that it could help create more favorable conditions for dialogue between the North and the U.S.," he said.

North Korea is known for chronic food shortages and the scarcity appears to be getting worse due to the fallout of last year's flooding and the prolonged border controls put in place to ward off the global coronavirus pandemic.

Seoul has pushed for provision of humanitarian aid and cooperation in the public health sector, including joint efforts to fight the global coronavirus pandemic, as ways to get the stalled inter-Korean relations moving again.

Pyongyang, however, has rejected offers for help, describing cross-border exchanges in humanitarian and public health areas as "non-fundamental" issues in inter-Korean relations.

The prospects for inter-Korean relations got murkier last week when Kim Yo-jong, the powerful sister of leader Kim Jong-un, issued a harshly-worded statement and slammed South Korea for going ahead with its springtime joint military drills with the U.S.

She threatened to scrap a tension-easing military deal and disband a party organ tasked with handling cross-border affairs and dialogue.

South Korea and the U.S. wrapped up their military exercises last week involving a "minimum level of troops" due to the coronavirus situation. Seoul had also called for a "wise" and "flexible" approach in a way that the combined exercises do not heighten cross-border tensions.

Lee took note of the fact that cross-border military tensions were not heightened much during the combined military drills, saying that Seoul's efforts appear to have played a part.

As for Kim Yo-jong's statement, however, Lee expressed regret, saying that Pyongyang should have understood Seoul's good-will endeavor and tried to find common ground through dialogue, not threats.

"There could be differences in views between the South and the North, which is why we need to meet and have dialogue to find wise solutions," he said. "I think we can build our future in a more positive way should one respect and keep manners for the other and its people." 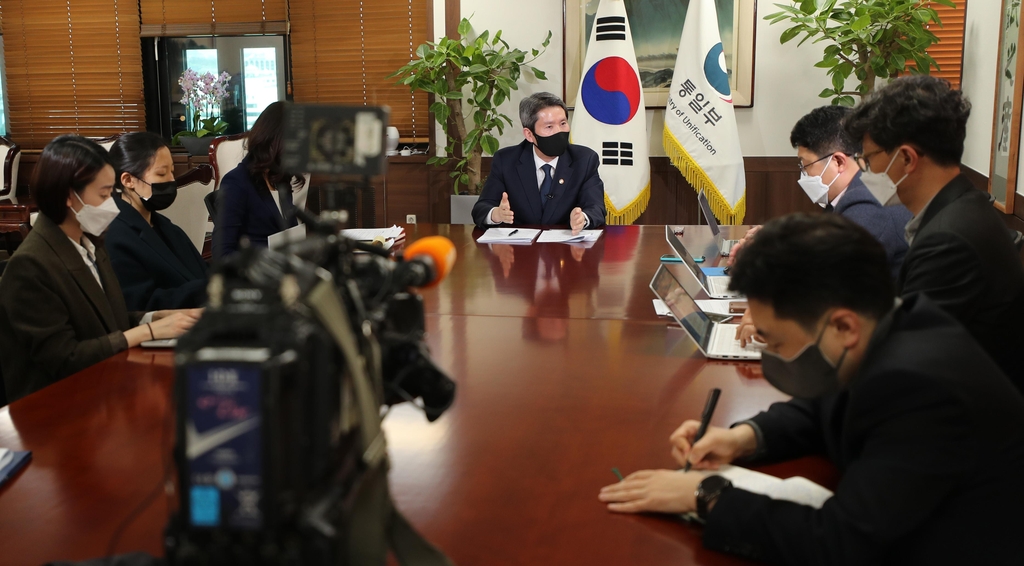 Lee hoped for the U.S. to engage the North "at an early date," saying that speed is as important as direction. He also hoped that the new U.S. government of President Joe Biden will sufficiently reflect Seoul's peace initiative in its ongoing North Korea policy review, which is expected to be finalized in a few weeks.

"Speed and direction are both important," Lee said. "I think that it would be a positive sign if such engagement policy centering on diplomatic solutions (to North Korea) materialize at an early date."

"It would also carry a very important and positive significance if (Washington) sufficiently voices its support for and intention to cooperate with our government's Korean Peninsula peace process," he added.

Nuclear talks have been in a stalemate since a 2019 no-deal summit between the two countries as they failed to agree on how to match Pyongyang's denuclearization steps and Washington's sanctions relief.

Lee urged Washington and Pyongyang to come out for talks even if they are not 100 percent satisfied with conditions.

"Even if they are not 100 percent, but just 70-80 percent satisfied, they need to come out for talks," he said. "They should have dialogue in a flexible and heart-to-heart manner. Getting rid of hostility can start with dialogue and end with negotiations."

Washington earlier said that it had reached out to North Korea for talks but Pyongyang remained unresponsive.

On Thursday, North Korean First Vice Foreign Minister Choe Son-hui confirmed the U.S. had reached out for talks but stressed that Pyongyang will continue to ignore any contact unless Washington withdraws its hostile policies toward Pyongyang.

Her statement came as U.S. Secretary of State Antony Blinken and Defense Secretary Lloyd Austin were in Seoul for talks with their South Korean counterparts to discuss a coordinated strategy on North Korea.

Lee said that Pyongyang and Washington appear to have begun probing each other's intentions, saying that it must be just the beginning.