SEOUL, March 23 (Yonhap) -- The prosecution has seized the house of former President Park Geun-hye after she failed to pay financial penalties ordered by the Supreme Court in its final ruling on her corruption and power abuse cases, prosecution officials said Tuesday.

In its high-profile ruling on Jan. 14, the top court upheld a 20-year prison sentence, a fine of 18 billion won (US$15 million) and a forfeit of 3.5 billion won for Park, who was convicted in a massive power abuse and bribery scandal that removed her from office in 2017. Imprisoned in March 2017, Park has to serve 22 years in prison, which includes a two-year prison term for her 2018 conviction for illegal meddling in a nomination process of the then-ruling Saenuri Party. 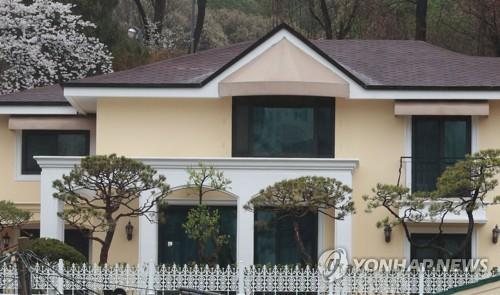 One day after the Supreme Court ruling, the Seoul Central District Prosecutors Office sent a written order to Park to pay her financial penalties totaling 21.5 billion won by Feb. 22.

As the former president failed to comply with the order by the deadline, however, the prosecution office seized her residence in Naegok-dong, southern Seoul, the following day.

Earlier in 2018, a Seoul court approved the prosecution's request to freeze Park's assets, including the Naegok-dong house officially valued at 2.8 billion won at that time, bank deposits and checks worth 3 billion won, in anticipation of her possible conviction.

According to the prosecution officials, prosecutors had confiscated 2.6 billion won from Park's financial assets by March 16.

They said prosecutors have asked the Korea Asset Management Corp. to sell Park's seized house by public auction. Under criminal law, fines must be paid within 30 days after the court's final ruling. If the fines are not paid, convicts can be imprisoned in a workhouse for up to three years.