SEOUL, March 23 (Yonhap) -- The opposition's pick of a single unified candidate for the April 7 Seoul mayoral by-election signals the start of a tough electoral season for a ruling party hit by a massive ethics scandal and falling approval ratings for President Moon Jae-in.

On Tuesday, former Seoul Mayor Oh Se-hoon of the main opposition People Power Party (PPP) beat entrepreneur-turned-politician Ahn Cheol-soo of the minor opposition People's Party in a public opinion survey to emerge as the standard-bearer of the conservative bloc. 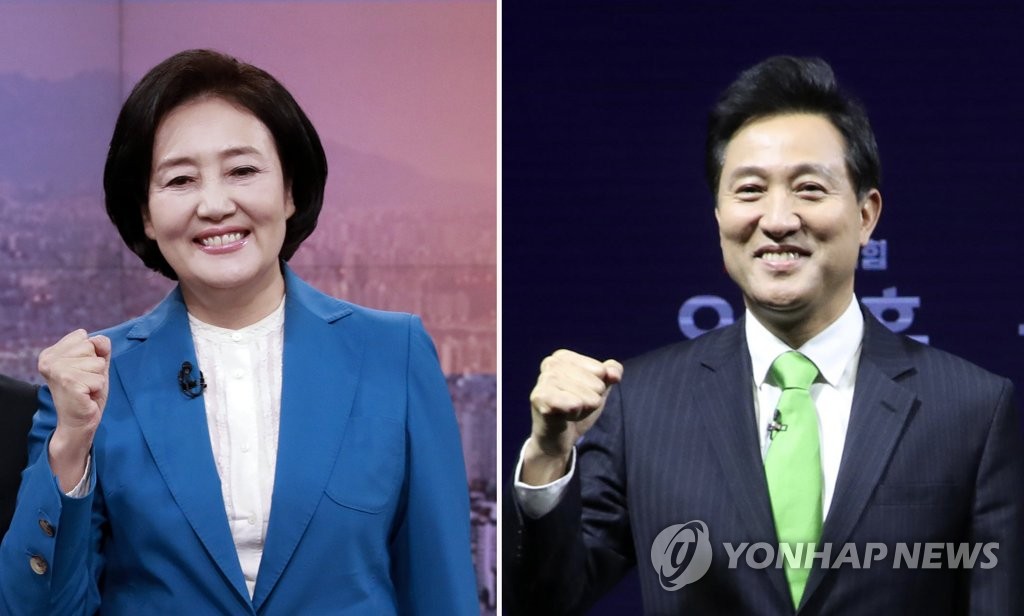 Oh's victory put an end to a monthslong battle over which conservative candidate is fit to "punish" the ruling Democratic Party (DP) for the failure of its late liberal Seoul Mayor Park Won-soon, whose apparent suicide in July amid allegations against him of sexual abuse prompted the by-election.

The pick of a single candidate improved the opposition's chances in the electoral showdown that is to begin with the mayoral poll only two weeks away and end with the next presidential vote in March 2022.

Opinion surveys have shown that a single unified opposition candidate will have a higher probability of beating the DP candidate, former SMEs minister Park Young-sun, than when both Oh and Ahn run.

In a public opinion poll conducted Friday and Saturday by Ipsos, Oh led his DP rival by 50.6 percent against 36.8 percent in a hypothetical two-way race. Pitted against Ahn, Park still lost, 52.3 percent to 35.6 percent.

The gains were bigger from two weeks earlier, when a similar survey by the same pollster showed Oh and Ahn with leads of 3.7 percentage points and 7.5 percentage points, respectively, over Park.

In a three-way scenario, however, the DP contender beat both opposition candidates with 32.9 percent against Oh's 32.3 percent and Ahn's 23.2 percent, according to the latest survey.

Both surveys had a margin of error of 3.1 percentage points at a 95 percent confidence level. 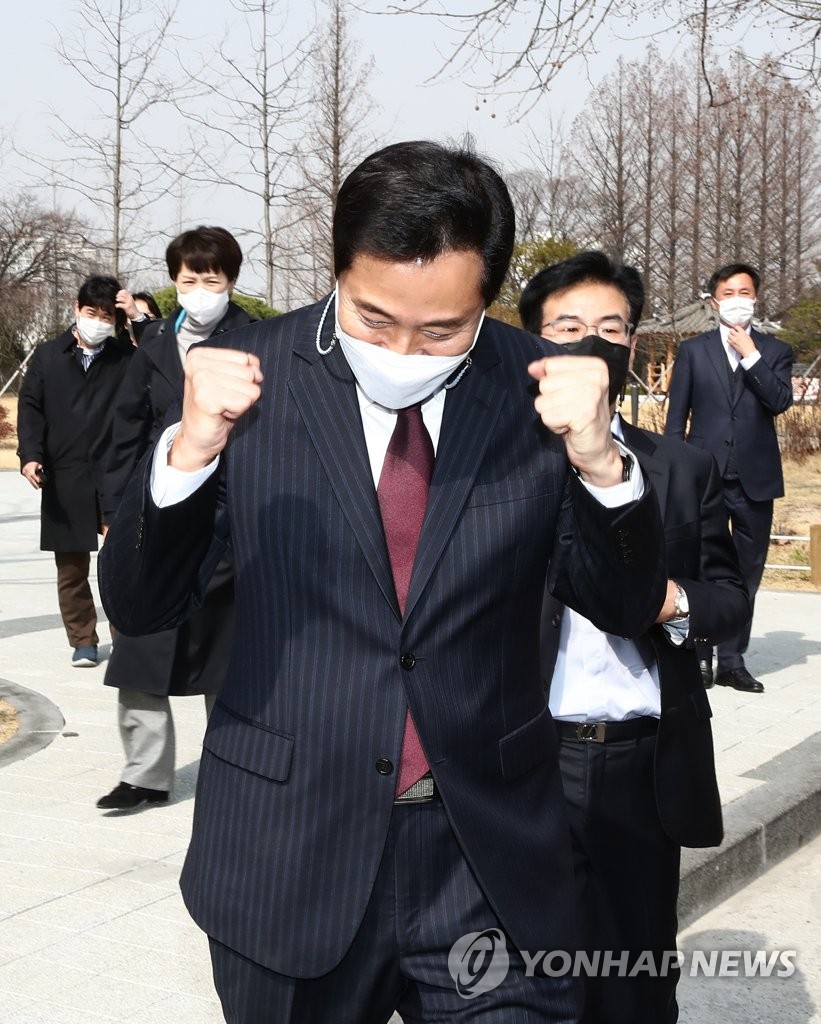 Park's apparent disadvantage is a reflection of the overall political crisis faced by the ruling party amid fierce public discontent over soaring home prices and damning allegations of real estate speculation by public officials.

President Moon's own approval rating fell to 34.1 percent in a Realmeter survey conducted from March 15-19, his lowest since taking office in 2017.

The same survey put the DP's support rate at 28.1 percent, also an all-time low since the start of the Moon administration.

Rep. Ahn Gyu-back, a senior member of Park's campaign, dismissed Oh's higher ratings as a "temporary phenomenon," saying the DP has a good chance of winning the election because of the "growing determination" of its members.

But another campaign official admitted on condition of anonymity that the party has long considered Oh the more formidable opponent when compared with Ahn.

"Oh has prior experience as a mayor and is strong on details when it comes to debates," the official said. "He also has the full support of the PPP establishment."

"The biggest beneficiaries of the current government are public sector workers and wage earners. Under this administration, they got minimum wage increases, stabilized working conditions and more public sector jobs, and now it turns out they took advantage and pocketed more," he said. "Even though the current government has done a good job of preventing corruption at the top levels, its core support base has done bad things, which to the public appears as one and the same.

"Unless the opposition is hit by a scandal of a similar scale, (the public's disappointment) will continue for now," he added.

Other analysts countered that it is too early to predict a winner, noting that the capital city has traditionally been a stronghold of the liberal ruling bloc.

Moreover, if the opposition continues to demonstrate a strong showing in opinion polls, it could have the paradoxical effect of making Oh's supporters complacent and rallying the ruling party's supporters behind Park, they said.

On Tuesday, Oh renewed his resolve to win back the mayoralty he stepped down from in 2011 in protest of a free school lunch program led by the then opposition.

"I will uphold at all costs the citizens' stern call to judge the administration by unifying (candidacies) and open wide the path to a power transition," he said at a press conference.

Park retorted in a meeting with reporters: "It's a choice between Seoul's future, Mayor Park Young-sun, and a worn and failed mayor." 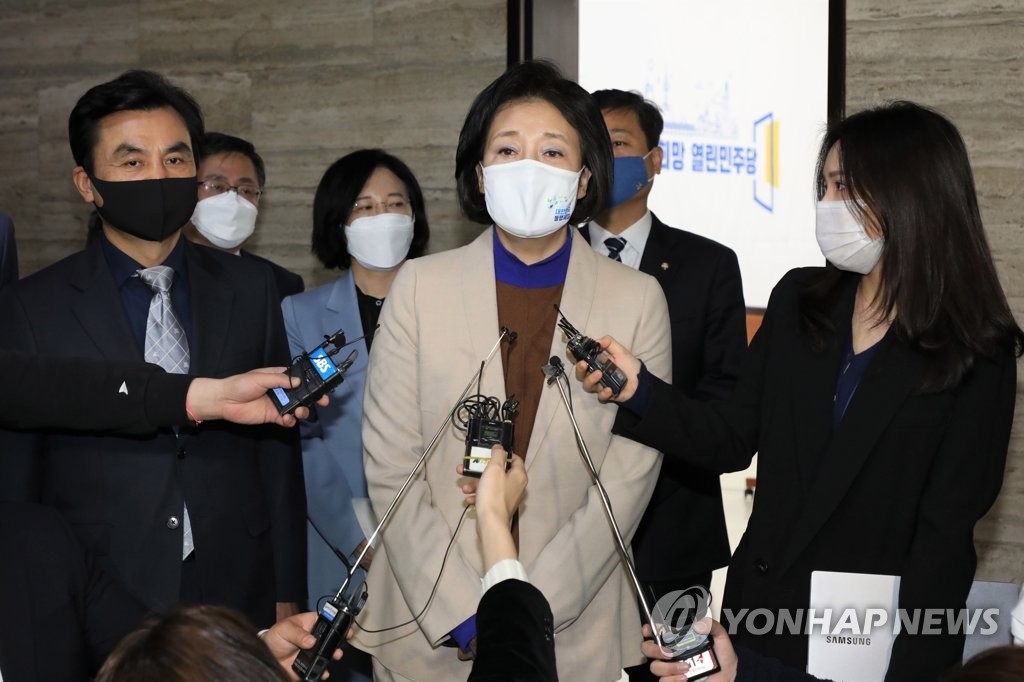