"We do not publicly respond to every kind of test. What I think (we) are trying to underscore for you is that this is a system that is not covered by U.N. Security Council (UNSC) resolutions," a second administration official told reporters, while speaking on condition of anonymity.

"It is a normal part of the kind of testing that North Korea would do," the official said. "We do not believe that it is in our best interest to hype these things in circumstances, in which we would consider those activities as part of a 'normal' set of a tense military environment like we see on the Korean peninsula."

In Seoul, military sources said that the North fired two cruise missiles off its west coast Sunday, which is not subject to U.N. resolutions. Pyongyang has continued to maintain a self-imposed moratorium on nuclear and long-range missile testing since late 2017. 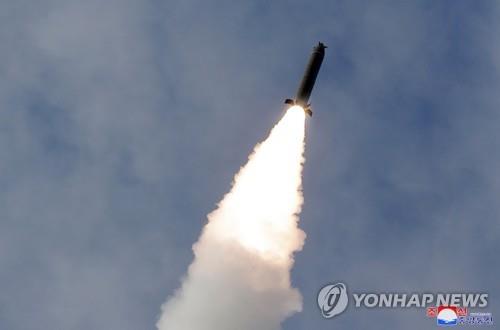 "And so because this does not, it probably gives you an indication of where it falls on the spectrum of concern," one of the officials said.

They said Washington will continue to engage North Korea.

"I will underscore that we have taken efforts, and we will continue to take efforts, and we believe that such diplomacy in close coordination with South Korea and Japan, and frankly with China, is in the best interest of all those concerned. We don't want a situation where it's perceived that our door is not open to talk," one of the officials said.

The U.S. earlier said it has tried to reach out to North Korea since mid-February, but that Pyongyang has remained unresponsive. North Korea's first vice foreign minister, Choe Son-hui, has said her country will continue to ignore U.S. overtures until Washington gives up its hostile policy toward Pyongyang.

"All I can tell you is that we are on our fourth foot in terms of wanting to clearly signal that we are prepared for continuing engagement in Northeast Asia with key partners and indeed with North Korea," one official said.

The Biden administration has been undertaking a comprehensive review of its North Korea policy, which Secretary of State Antony Blinken earlier said will lead to a "new" U.S. approach toward the recalcitrant North.

The officials said the policy review is now in its final stages.

They added National Security Adviser Jake Sullivan will host his South Korean and Japanese counterparts next week in Washington to discuss the outcome of the U.S. policy review.

"We are in the final stages of that review, and next week we plan to host the national security advisers of Japan and the Republic of Korea to discuss the outcomes and other issues," they said, referring to South Korea by its official name.

They said next week's meeting here will be "about a daylong."