SEOUL, March 24 (Yonhap) -- The top diplomats of South Korea and Russia touted progress in diplomatic, economic and other exchanges between their countries on Wednesday as they marked the 30th anniversary of the establishment of bilateral ties.

South Korean Foreign Minister Chung Eui-young and his Russian counterpart, Sergey Lavrov, attended an event to mark the anniversary, which was supposed to take place last year but had been postponed due to the COVID-19 pandemic. The countries opened their diplomatic relations on Sept. 30, 1990.

Chung pointed to a sharp rise in bilateral exchanges, such as an increase in two-way trade, which rose to over US$22 billion in 2019 from $200 million recorded 30 years ago, stressing that it is proof that the two countries are "good friends and partners."

"Especially over the last four years, the bilateral relations have made big progress in both qualitative and quantitative terms," he said, stressing frequent high-level exchanges, including summit-level talks. Chung also stressed that Russia has been together with South Korea on a journey for lasting peace on the divided Korean Peninsula.

"Going forward, our government will do its best to achieve progress in the Korean Peninsula peace process," he said. "I expect invariable support and cooperation from the Russian government and its citizens."

Lavrov said the two countries' decision to establish relations three decades ago plucked them out of a "vicious circle of the Cold War," while praising the bilateral ties as a "truly good and friendly" partnership.

"I can confidently tell you that relatively in a short span of time, the two countries have come a long way. And now, Russia and the Republic of Korea have a truly good and friendly partnership," he said in congratulatory remarks interpreted in Korean. 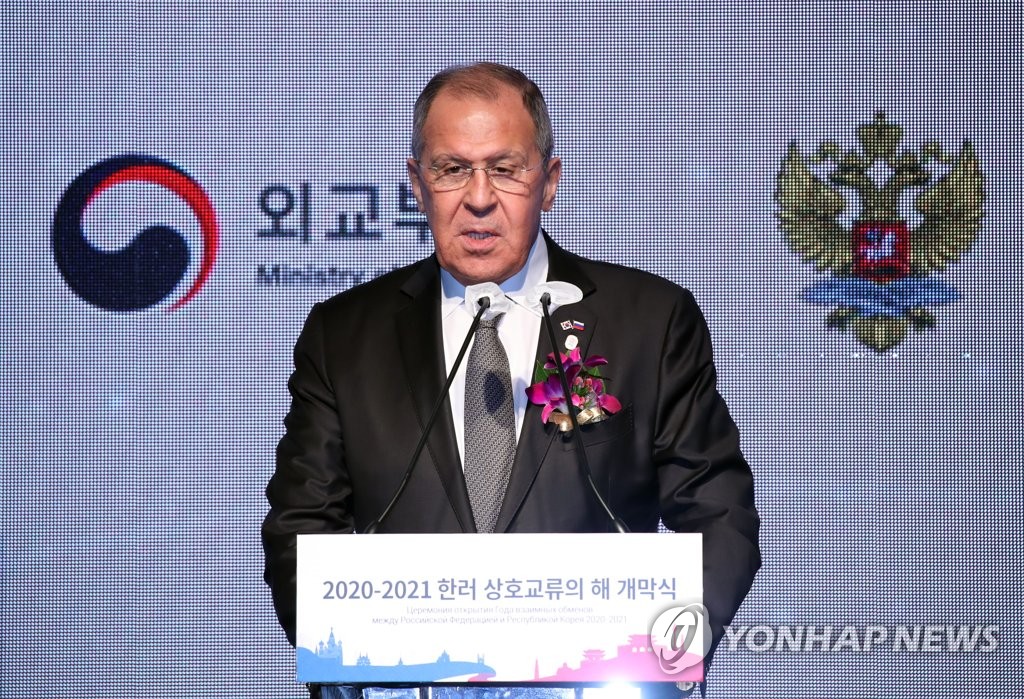 "This relationship is characterized by shared interest, high-level understanding and trust ... Bilateral cooperation has dynamically developed through trade, economic exchanges and investment," he added.

Chung and Lavorv are set to hold bilateral talks on Thursday to discuss a range of issues, including the Korean Peninsula situation, bilateral relations and regional cooperation.

Lavorv arrived here on Tuesday following a trip to China. He is set to leave here on Thursday.