SEOUL, March 25 (Yonhap) -- Russian Foreign Minister Sergey Lavrov called for efforts to maintain peace on the Korean Peninsula and warned against "all kinds of military activities" Thursday, hours after North Korea fired off what appeared to be ballistic missiles into the East Sea.

Lavrov made the remark in a press statement after his talks with Foreign Minister Chung Eui-yong, where South Korea called for Moscow to play a "constructive" role in fostering a lasting peace on the divided peninsula.

"I particularly emphasized the importance of efforts to maintain peace and stability in Northeast Asia, as well as on the Korean Peninsula," the top Russian diplomat said in remarks interpreted in Korean.

"What's included in that is that all concerned countries have to renounce an arms race and activation of all kinds of military activities," he added.

Earlier in the day, the North fired two projectiles presumed to be short-range ballistic missiles into the sea, Seoul's Joint Chiefs of Staff said, as Washington is set to complete its policy review on the recalcitrant regime in the coming weeks.

Touching on the launches, Chung said he expressed "deep concern."

"I also asked for Russia to continue to play a constructive role going forward," he added.

Also in his press statement, Lavrov stressed that Russia is interested in an "open and inclusive" forum for regional cooperation -- in what appears to be a rebuke of the United States' push to cement the Quad forum involving Australia, Japan and India.

Noting that Chung has reaffirmed Seoul's invitation for Russian President Vladimir Putin's visit here, Lavrov said that the two sides decided to discuss the matter when the COVID-19 situation stabilizes.

At the start of their talks, Chung called Russia a partner for regional peace, while touting progress in bilateral exchanges since the establishment of relations between the two countries in 1990.

"The relations between South Korea and Russia -- partners on a journey for peace and prosperity on the Korean Peninsula and in Eurasia -- have steadily been developing in a multi-faceted way," Chung said at the start of the talks.

"Conditions for exchanges and cooperation in the midst of the COVID-19 pandemic are not easy. But particularly at such a juncture, we should closely cooperate to strengthen communication and activate people-to-people exchanges," he added.

The two countries' first foreign ministerial meeting in Seoul since 2009 came after tensions flared anew due to North Korea's missile launches in the morning and an acrimonious Sino-U.S. rivalry that has brought China and Russia closer together.

Lavrov's visit to Seoul following his trip to Beijing has developed geopolitical overtones, as the United States pushed to "reinvigorate and modernize" its regional democratic alliances, with China and Russia moving to close ranks with each other.

Lavrov is set to leave here later in the day. 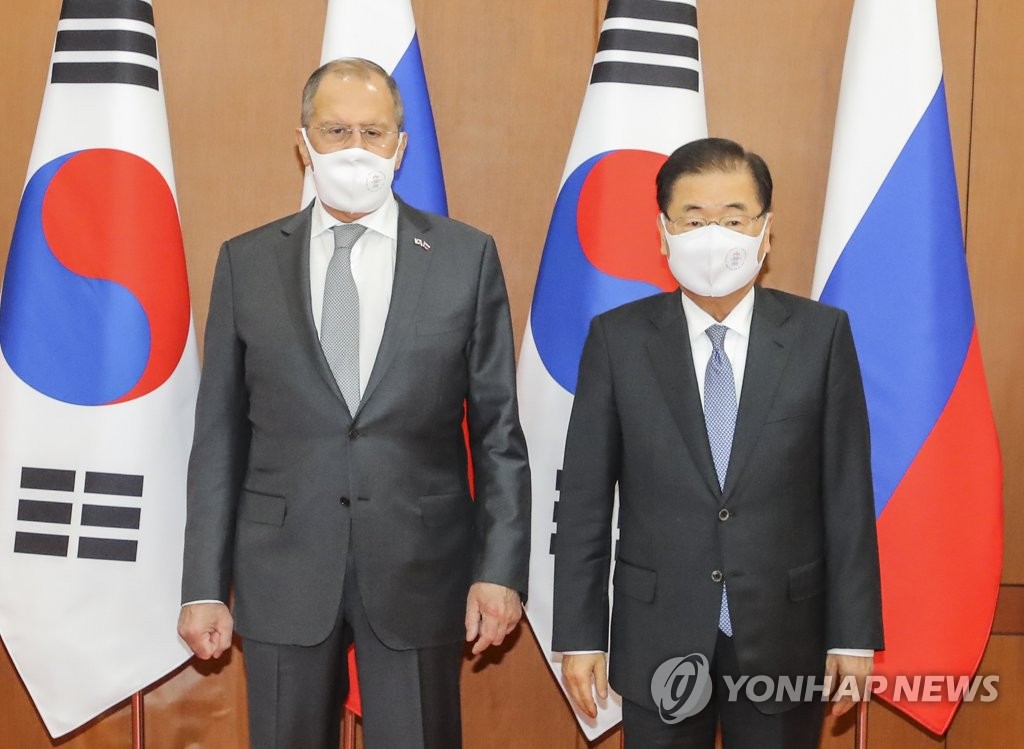