SEOUL, March 25 (Yonhap) -- More than half of South Koreans in their 10s and 20s think it is not necessary to have kids after marriage, a report showed Thursday, adding to concerns about the country's chronic low birth rate.

As of 2020, 32 percent of Koreans aged 13 or older said it is not necessary to have children after getting married, up from 30.4 percent two years earlier, according to the report on social indexes by Statistics Korea.

All age groups felt less need to have kids after marriage, but in particular, more than half of people in their 10s and 20s believed having kids is not a must.

The report showed 39.4 percent of teenagers and 47.5 percent of those in their 20s think there is a need to have children after tying the knot. The tally compared with 46.4 percent and 51.5 percent, respectively, in 2018. 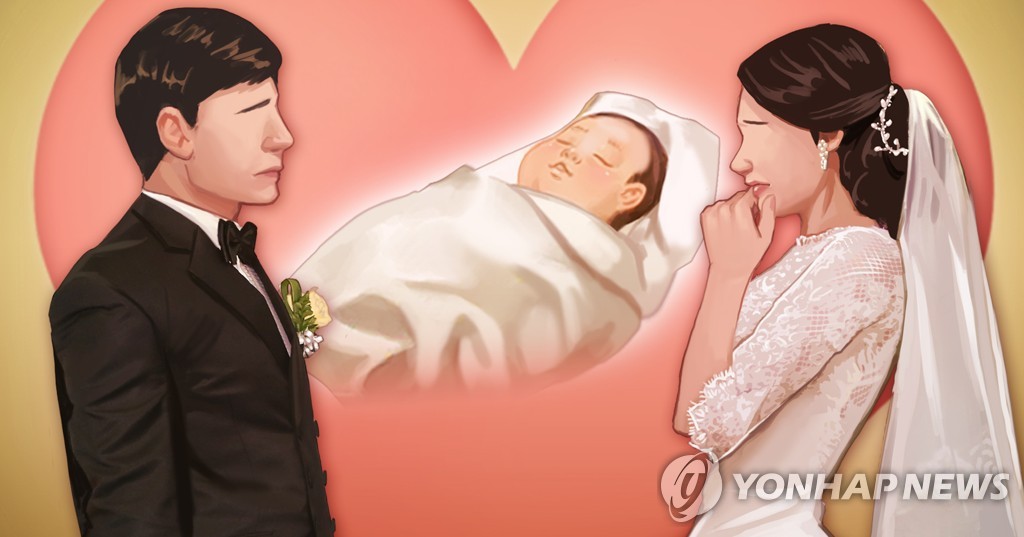 South Korea is struggling with a sustained fall in childbirths as many young people delay marriage or give up on getting married or having babies amid a prolonged economic slowdown.

The country's total fertility rate -- the average number of children a woman bears in her lifetime -- hit a new record low of 0.84 last year. It marked the third straight year that the rate was below 1 percent.

The portion of South Koreans who think it is necessary to get married during one's life came to 51.2 percent last year, up 3.1 percentage points from 2018, the report showed.

It topped the 50 percent mark for the first time since 2016, but the statistics agency said it is too early to assess that people's perceptions about marriage have changed, given the downtrend in marriages.

Koreans aged 65 or older accounted for 15.7 percent of the total population of 51.8 million last year, up from 14.9 percent the previous year, the report said.

Amid rapid aging, the country is widely expected to become a super-aged society in 2025, in which the proportion of those aged 65 or older will hit 20 percent of the total population. South Korea became an aged society in 2017.

The average life expectancy of South Koreans reached 83.3 years in 2019, the latest figure available, up from 82.7 years the previous year.

Half of younger Koreans see no need to have kids after marriage: report

Half of younger Koreans see no need to have kids after marriage: report