SEOUL, March 25 (Yonhap) -- Rival Seoul mayoral candidates Park Young-sun and Oh Se-hoon officially kicked off their campaigns Thursday in the run-up to the high-stakes election two weeks away, seen as a bellwether for the presidential vote next year.

Park, a former Startups Minister running on the ticket of the ruling Democratic Party (DP), showed up at a convenience store in the bustling entertainment district near Hongik University in western Seoul as an overnight part-timer shortly after the start of the official 13-day campaign period for the April 7 by-elections.

Candidates and the staff members of their campaigns are allowed to mobilize pamphlets, public speeches, uniforms and other campaign tools during the designated period to rally support under the official election law.

A total of 21 local administrative and legislative posts, including the mayoralties of Seoul and Busan, are up for grabs in the elections.

Park tended store shelves alongside a young part-time colleague, sharing her policy visions for the Seoul mayoral seat with him, on the very first stop of her campaign.

"I wanted to experience firsthand the suffering and fatigue of small merchants, the self-employed and the youth who are bearing the toughest brunt of the COVID-19 pandemic," Park told reporters following the campaign event. "I told myself that I should be a mayor who works to improve the livelihoods of people." 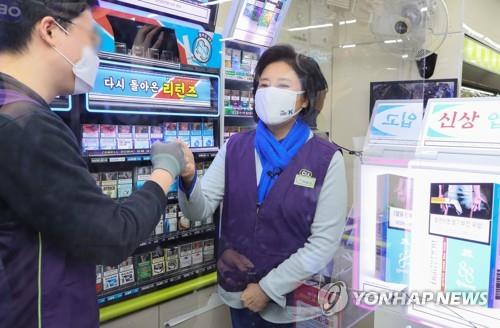 At the same time, Oh, a former Seoul mayor and the standard-bearer of the conservative People Power Party, was scrubbing the interior of a subway train parked at a subway terminal in eastern Seoul.

Oh chose the subway site as the first destination of his campaign, putting the top priority of his mayoral vision for Seoul on the fight against the yearlong COVID-19 pandemic.

"I am beginning an election that will serve as an opportunity to make Seoul, the heart of South Korea, beat again," Oh told reporters, vowing to support "those who toil behind the scene" with policies and campaign pledges.

The April 7 by-elections will set in motion a high-stakes electoral showdown for the rival parties, which will culminate in the upcoming presidential election in March 2022. 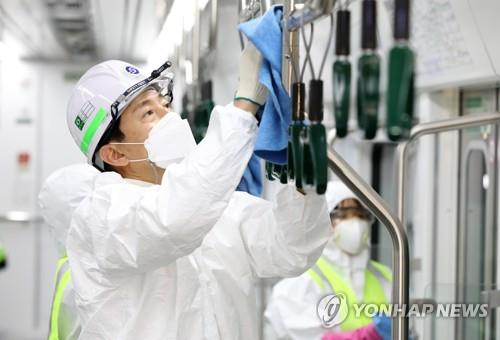 An ongoing land speculation scandal involving employees of the state housing developer and other government offices has pummeled public sentiment toward the DP-affiliated incumbent liberal government of Moon Jae-in, whose approval rating fell to its lowest point ever in the latest opinion poll conducted last week by Realmeter.

The scandal centers on allegations that more than 20 employees of the state-run firm known as LH used insider information to make speculative land purchases at public housing development sites. It inflamed public outrage at a time when the government is struggling to rein in skyrocketing housing prices.

Both rival candidates have been leveraging the public backlash over the real estate issue to launch attacks on each other.

Park, backed by DP lawmakers, doubled down on her swipe at allegations facing Oh that he used his influence to turn a vast swathe of land in southern Seoul, which his family owned, into a site for a large-scale state housing project while he was serving as Seoul mayor from 2006-2011. His family reportedly received some 3.6 billion won (US$3.2 million) in return.

"The issue is equivalent to the origin of the ongoing scandal involving LH," Park said Wednesday, zeroing in on the allegations surrounding her rival.

Oh and his party, meanwhile, tapped into the growing public discontent over the overheated housing market, urging voters to pass a judgment against the Moon government and his party via the upcoming elections.

"This coming election is one that judges the Moon Jae-in administration for all of its policies taken during the past four years," PPP chief Kim Jong-in told reporters. 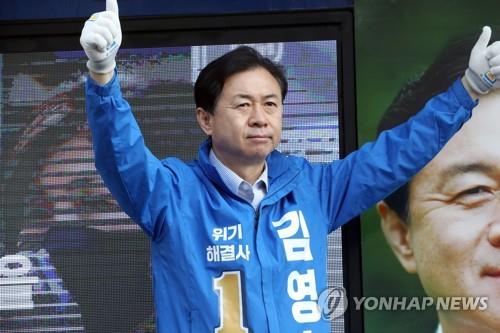 Also on Thursday, rival Busan mayoral candidates Kim Young-choon of the DP and Park Hyung-jun of the PPP launched their campaigns in the second-biggest South Korean city during the morning rush hour.

"Busan needs a mayor from the ruling party, who could help the city stand up again in cooperation with the Moon government and the majority party," Kim told citizens atop a campaign truck.

"This election should serve (as a chance) to judge the Moon administration's four years in power ... and to bring in a new wave of innovation in Busan," Park urged Busan citizens. 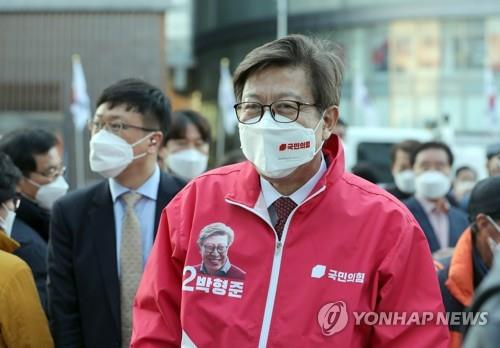 The by-elections were called after both of the predecessors affiliated with the DP were engulfed in sexual harassment accusations raised by female subordinates.