"As we are aware of the seriousness of the current situation, we decided to terminate the broadcasting contract of 'Joseon Exorcist' and cancel its upcoming broadcasts," SBS said in a statement.

It said it has already paid for the series' TV rights and that production has nearly completed, but it made the decision to "take full responsibility" as a terrestrial TV network.

Production studios including YG Studioplex and Lotte Cultureworks said they have already suspended production and will drop video streaming from overseas platforms like WeTV as soon as possible.

"We again apologize for hurting Korean viewers," they said in a joint release. "We are taking steps to scrap overseas sales contracts and terminate all overseas streaming services."

They said they will do their best to minimize damage to crew members behind the 32 billion-won (US$28.3 million) project. 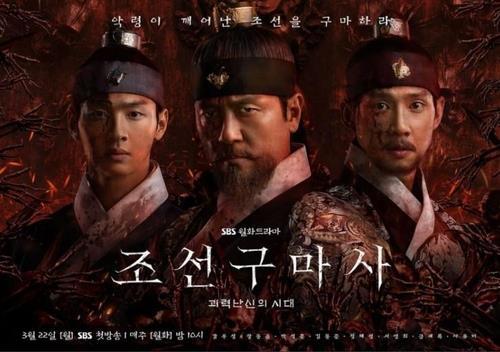 Set in the early 15th century during the reign of King Taejong, the third on the throne of the 1392-1910 Joseon Dynasty, the 16-episode Monday-Tuesday show premiered on SBS this week.

Since its first episode aired this Monday, however, the show has been under fire for distorting Korean history and using Chinese-style props in a period show portraying actual historical figures.

People criticized scenes in which a hallucinating King Taejong massacres innocent Joseon people and the crown prince, who later becomes King Sejong, drinks Chinese liquor and eats Chinese food, such as dumplings, mooncakes and century eggs, at a tavern located in Joseon territory.

Producers of "Joseon Exorcist" issued a public apology and promised to remove the controversial scenes and put the project on hold for a week to realign the storyline.

But debates criticizing the show have continued across online communities and led some companies to withdraw sponsorship and advertisement deals with the TV series.

At the same time, insiders expected that new period TV projects will be affected by the cancellation of "Joseon Exorcist."

Critics also point the finger at some projects like tvN's "The Golden Hairpin," a local adaptation of a popular Chinese historical web novel.

The historical drama "Mr. Queen," a remake of a Chinese web drama, was embroiled in similar historical controversies to "Joseon Exorcist," with both shows sharing the same screenwriter.

"Public sentiment against the distortion of history is stronger than expected," said an official from a drama production. "Productions will increase their capability to monitor and review screenplays of historical series."

Experts noted that producers need to be more careful in striking advertisement deals with Chinese companies.

Korean people have become more unfavorable toward Chinese characters in Korea-made shows in the aftermath of recent Chinese claims that some aspects of Korean culture, like kimchi, a Korean side dish made with fermented cabbage, are of Chinese origin.