Almubaraky has spent 10 of his more than 35 years in diplomatic service in Korea. His first overseas assignment was as secretary at the Saudi Arabian Embassy in Seoul from 1990-95. Since 2016, he has served as Riyadh's ambassador to South Korea.

Next month, he plans to complete his five-year term and return home to retire.

"I hope his time in Seoul becomes a good memory and gift. I trust that as an honorary citizen of Seoul, he will continue to be with us, with unchanging affection for Seoul, even after he returns home," acting Seoul Mayor Seo Jeong-hyup said.

"We look forward to his role as an honorary ambassador promoting Seoul," Seo added. 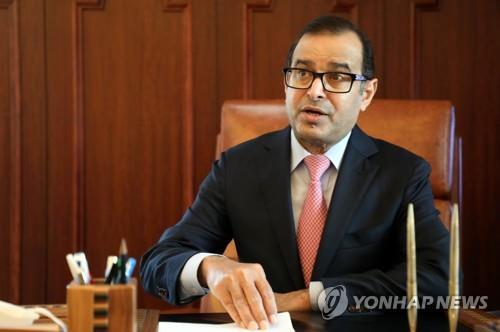 Almubaraky contributed to increasing exchanges between South Korea and Saudi Arabia by helping to simplify visa rules in 2019, according to the city government.

Recently, he has been working to establish a friendship city agreement between Seoul and Riyadh, and create a Korean language major and a Korean studies institute at King Saud University in the Saudi capital.

The award ceremony is scheduled for Friday afternoon at Seoul City Hall.