Seoul Semiconductor Co. and Samsung Electronics Co. maintained their status as the world's fifth- and seventh-largest automotive LED suppliers, respectively, in 2020, but their market shares and sales grew, according to market researcher TrendForce.

Seoul Semiconductor's revenue jumped 3.2 percent to US$130 million last year for a market share of 5.1 percent, up from 4.7 percent a year earlier. 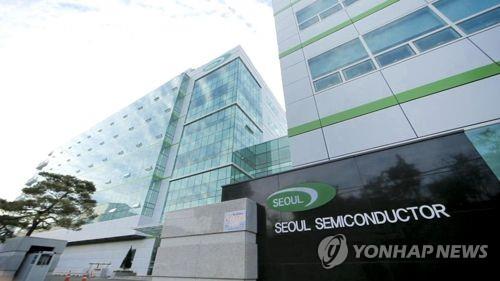 Samsung Electronics, which runs the LED business under its device solutions (DS) unit, logged a revenue of $71 million in 2020, up 18.3 percent from a year earlier, while its market share expanded from 2.3 percent to 2.8 percent.

The two South Korean firms were among the top 10 players to post growth in last year's automotive LED market, whose revenue declined 3.7 percent on-year to US$2.57 billion after the COVID-19 pandemic hampered the global auto industry.

Germany's Osram Opto Semiconductor GmbH expanded its leadership with a commanding 36 percent market share in 2020 after posting $926 million in revenue, according to TrendForce.

Japan's Nichia Corp. came in second, although its market share declined from 25.2 percent to 23.6 percent after its revenue slid 9.6 percent on-year to $608 million. Amsterdam-based Lumileds Holding B.V. took the third spot with a market share of 12.2 percent.

TrendForce said the global automotive LED market is expected to be reach $2.92 billion in 2021, up 13.7 percent from a year ago, on the back of rising demand for automotive headlights and display panels.