SEOUL, March 26 (Yonhap) -- Japan's Nippon Steel Corp. on Friday reiterated its claim that the company is not liable to pay compensation to South Korean victims of forced labor during World War II.

The Seoul Central District Court heard arguments in a lawsuit filed by two South Koreans who worked for Japan Iron and Steel Co., Nippon Steel's forerunner, in 1941 and 1944.

The plaintiffs demanded 100 million won (US$88,295) per person in damages. They lodged the suit in April 2019 after the Supreme Court ordered Nippon Steel to pay four South Korean wartime forced laborers the same amount in October 2018. 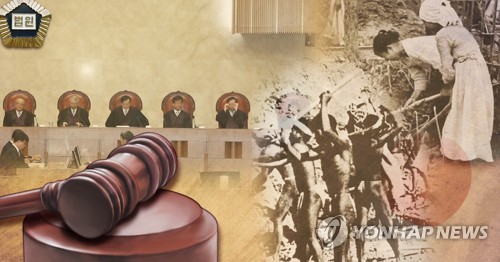 At the hearing, the company repeated arguments that have already been rejected by the top court in the landmark ruling.

The lawyers for Nippon Steel said the issue of compensation claims stemming from Japan's 1910-1945 colonial rule was settled under a 1965 treaty that normalized diplomatic ties between the two countries.

They also said Nippon Steel is a different entity from Japan Iron and thus does not inherit the wartime steelmaker's liabilities.

The attorneys for the plaintiffs countered that such issues were already cleared up by the Supreme Court when it ruled in favor of victims in 2018.

The court set the next hearing for May 21.
(END)