The 71-year-old prime minister was given the vaccine shot at the Jongno Ward public health center near the government headquarters complex in central Seoul, along with Health Minister Kwon Deok-cheol and Interior Minister Jeon Hae-cheol.

"It did not hurt at all," Chung told reporters following his 30-minute stay at the health center after the shot, which is required for vaccine receivers to monitor any adverse effects.

"It was just like getting a flu shot ... It was neither painful nor different from usual," he told reporters.

The remarks represent another gesture by a top government official to demonstrate the safety of COVID-19 vaccines as a nationwide vaccination program is in progress. President Moon Jae-in got his first dose of the AstraZeneca vaccine earlier in the week.

"Vaccines are science, not politics," Chung said, warning the public against any fake news that stokes skepticism about vaccines' efficacy or safety.

"Vaccinations are for you, your family and your neighbors to return to (normal) everyday lives quickly," Chung said, calling on the public to get vaccinated when their turn arrives.

The country launched the national vaccination campaign in late February, starting with health workers and patients aged below 65 at infection-prone nursing homes, rehabilitation facilities and sanatoriums across the country.

Earlier this week, those aged 65 and older began to receive AstraZeneca vaccine shots following a delay attributable to concerns about its safety. 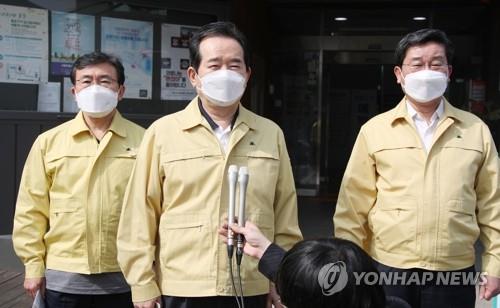