WASHINGTON, March 27 (Yonhap) -- Over 2,000 people in the United States and from around the world have taken part in a vigil to honor the victims of recent shootings in Atlanta that left eight people dead, six of them women of Asian descent.

The White House too mourned the deaths of the eight people while strongly denouncing violence against Asian-American communities on Friday, according to organizers.

"My heart goes out to all who are joining the Asian American community to remember the victims of the horrific shootings in Atlanta that claimed the lives of eight people," the White House said in a statement delivered by Cedric Richmond, senior adviser to President Joe Biden and director of White House Office of Public Engagement.

"President Biden has made clear that he condemns the distrusting rise in anti-Asian violence and that hate can have no safe harbor in America," the statement added.

The vigil was held in Atlanta, Georgia, on Friday, and was also streamed live for people taking part virtually. 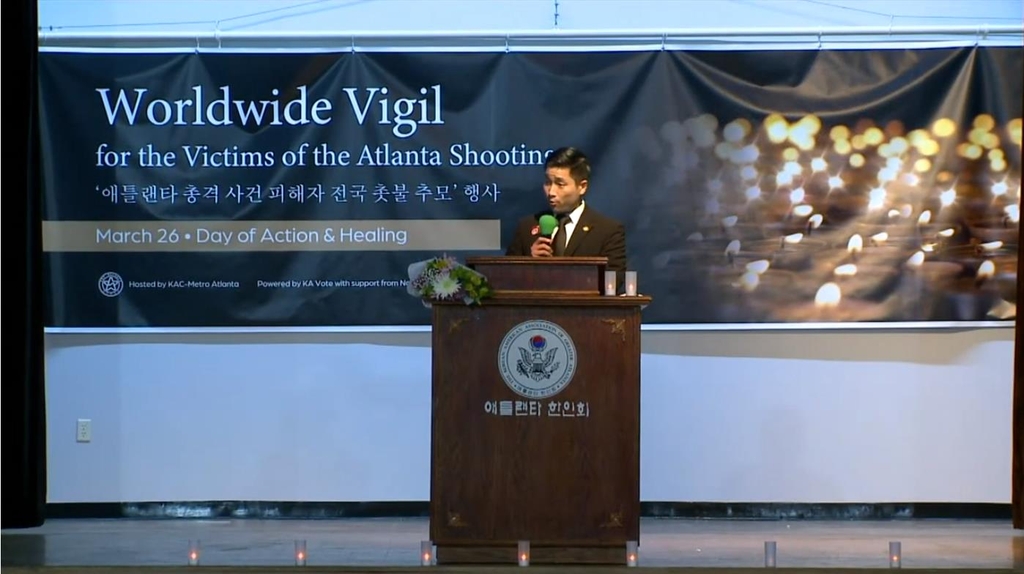 More than 300 organizations, including Nike, expressed their support for Friday's event, organizers said.

The solemn event came in the wake of deadly shootings at three day spas in the Atlanta area early last week.

"Whatever the motivation, we know this -- too many Asian-Americans have been walking up and down the streets and worrying, waking up each morning the past year, feeling their safety and the safety of their loved ones are at stake," he said last Friday after meeting with Asian-American leaders in Atlanta.

A 21-year-old suspect, identified as Robert Aaron Long, has been arrested and charged with eight counts of murder. Police investigators, however, have yet to establish his motive.

She partly blamed the former Donald Trump administration for the recent spike in hate crimes against Asian-American communities.

"For the last year we've had people in positions of Incredible power scapegoating Asian Americans," she said earlier. "Harm against any one of us is a harm against all of us. The president and I will not be silent."

A group of four Korean-American members of U.S. Congress underscored the need for solidarity.

"Tonight's vigil is not just a reminder of those we've lost; we have come together as Korean American members of Congress to demonstrate our solidarity in the face of hate and fear," they said in a statement.

"No one action, level of government, or individual can stop Asian hate. But by coming together, and bringing allies with us, we can make progress that will keep our AAPI community safe and honor those lives so cruelly and prematurely taken from us."

Sam Park, a Georgia state representative, stressed the need to work with other minority groups to root out all forms of racial bias and hatred in the United States.

"We must also understand the troubles we face are not isolated to Asian-Americans. Now is the time to stand in solidarity with the Black community that has suffered for 400 years of systemic racism," he told the event, held in Georgia and streamed live throughout the globe.

"Now is the time to stand with our Muslim and Jewish brothers and sisters; with immigrants and refugees, with the LGBTQ community. All who face discrimination and violence because of who they are and because of the color of their skin and whom they may love," Park added.

South Korea's ambassador to the United States, Lee Soo-hyuck, offered his condolences to the victims and their families, along with a pledge to fight against anti-Asian hate.

"The Embassy of the Republic of Korea strongly condemns anti-Asian hate crimes which have increased recently, and reaffirms its support for all the efforts to uphold values of diversity, mutual respect and co-existence," he said in a statement sent to the vigil.

"The Embassy will continue to make every effort to protect Koreans from hate crimes in cooperation with the law enforcement authorities of the United States."