SEOUL, March 29 (Yonhap) -- Shares in South Korea's shipbuilders and shippers have enjoyed decent increases in the past weeks, but this time, they are again on a rising track on expectations for a further climb in freight rates and demand for ships amid the unprecedented blockage at the Suez Canal.

Pan Ocean Co., another major shipper, was trading at 6,640 won, down 2.78 percent as of the period following a 4.2 percent advance Friday.

HMM and other local shippers have raked in sharp rises in their stock prices amid soaring freight rates that stemmed from firm demand amid the pandemic.

This time, freight rates could further rise due to the congestion at the Suez Canal since last week.

A Panama-flagged 20,000 twenty-foot-equivalent unit (TEU) ship, operated by Taiwan-based Evergreen Marine Corp., was left stranded in the Suez Canal last week while heading from China to the Netherlands, blocking the passage of ships in both directions.

Around 19,000 ships pass through the canal every year, taking up roughly 12 percent of global trade. With the canal being responsible for roughly a third of the global container trade, analysts said the accident may lead to a hike in freight rates. 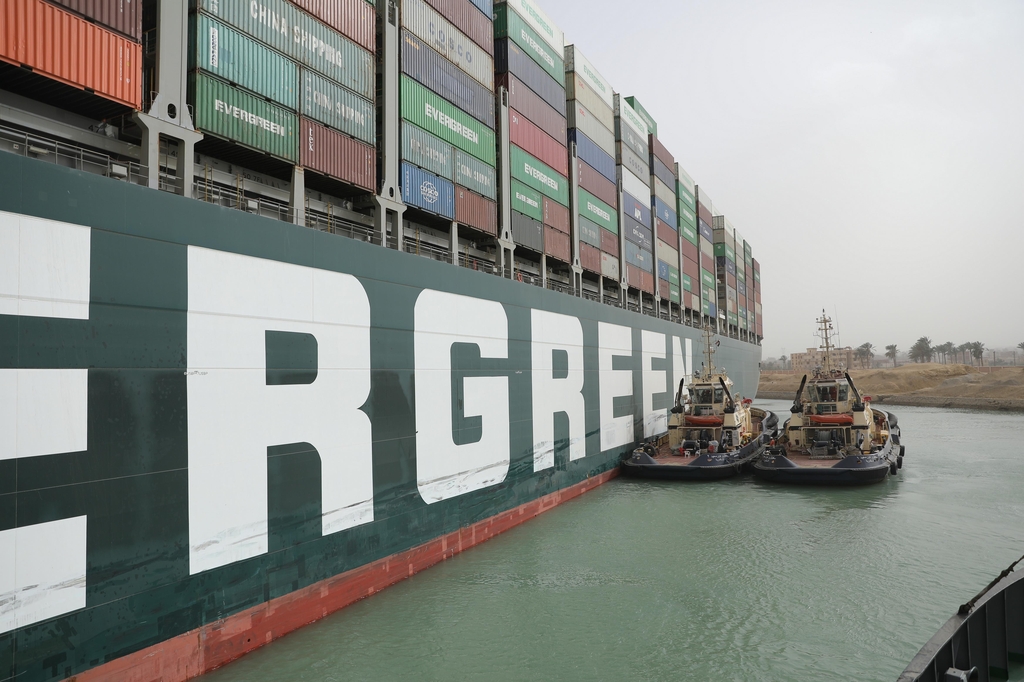 "The global maritime shipping industry has been facing shortages in supply for around six months," said Choi Go-woon, a researcher at Korea Investment & Securities Co. in a report, pointing out that the market may face yet another uptick in freight rates if the congestion is not resolved in the short term.

Jung Yeon-seung, an analyst from NH Investment & Securities Co., warned that shipping companies may face a higher burden in fuel costs when they take a detour through South Africa.

Since the outbreak of the accident, the oceans ministry said eight ships operated by South Korean firms have decided to take the alternative route, while some 30 ships were currently waiting near the canal as of Sunday. Analysts also hinted that the demand for air shipping services may also rise.

Local shipbuilders were also cited as beneficiaries from the accident amid the growing speculation that the incident was caused by the fault of the ship built in Japan.

"The incident has dealt a harsh blow to the credibility in the quality of ships built in Japan. This will lead to more orders for Korean shipbuilders," said Park Moo-hyu, a researcher at Hana Financial Investment Co.

The shipbuilders continued to gather ground Monday, with Samsung Heavy rising 7.46 percent as of 10:50 a.m., while Daewoo Shipbuiding advanced 5.1 percent.

South Korean shipbuilders already have been clinching a series of deals amid rising hope for the post-pandemic recovery.

Samsung said Friday it has obtained a 2.8 trillion-won (US$2.5 billion) order from a Panamanian company to build 20 container carriers.

Under the deal, Samsung Heavy Industries will deliver the 15,000-TEU vessels, on which energy saving devices will be mounted, by June 2025, the shipbuilder said in a regulatory filing.

Earlier in the month, Daewoo also struck a 265 billion-won deal to build three liquefied petroleum gas carriers with a European company, along with another batch of orders worth 1.1 trillion won from the Americas, Europe and Asia to build 10 very large crude carriers.