SEOUL, March 29 (Yonhap) -- South Korea is closely discussing with the United States ways to improve living conditions for American service members stationed on the THAAD missile defense base in the country, the defense ministry said Monday.

Ministry spokesperson Boo Seung-chan made the remarks after a recent Chosun Ilbo report that said U.S. Secretary of Defense Lloyd Austin strongly protested poor conditions of the base during his recent visit to Seoul, calling the neglect "unacceptable."

"I do not confirm details of what Secretary Austin said. But there have been talks about how to ensure conditions for training of the U.S. Forces Korea (USFK)," ministry spokesperson Boo Seung-chan told a regular briefing.

"South Korea and the U.S. have been closely discussing how to improve the environment of the Seongju base and ensure conditions for USFK training. We've also continued communication with local residents," he added. 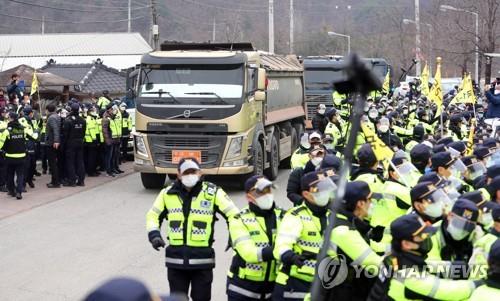 In 2017, the U.S. installed the Terminal High Altitude Area Defense (THAAD) system on the base in the county of Seongju, about 210 southeast of Seoul, in a bid to better counter North Korea's missile and nuclear threats.

Local residents have long been opposed to the stationing of the battery in their village, citing environmental and other concerns, and they have often clashed with police when the defense ministry has brought daily necessities for troops and construction equipment onto the base by ground.

Hundreds of U.S. and South Korean service members use shipping containers and an old golf clubhouse there, and basic supplies for troops and fuel have often been airlifted in, according to officials.

"We've been discussing the matter with local residents. We will strive further to find ways to resolve the issue, though it is far from easy to find a middle ground," a ministry official said.

The U.S. side has also been complaining about its troops' limited access to a firing range in the southeastern city of Pohang, a venue for the USFK's live-fire exercises involving Apache attack helicopters, amid protests from residents nearby about noise and other problems. 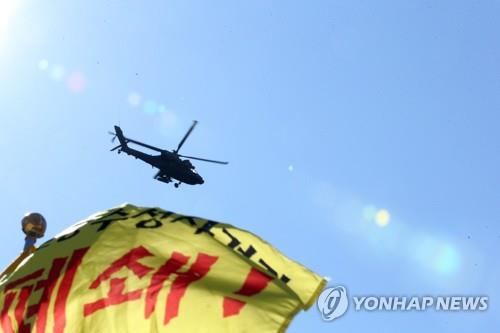