Public support for Yoon as South Korea's next leader surged to a record high of 34.4 percent in a Realmeter survey conducted on 2,547 adults nationwide from last Monday to Friday, according to the Seoul-based pollster. 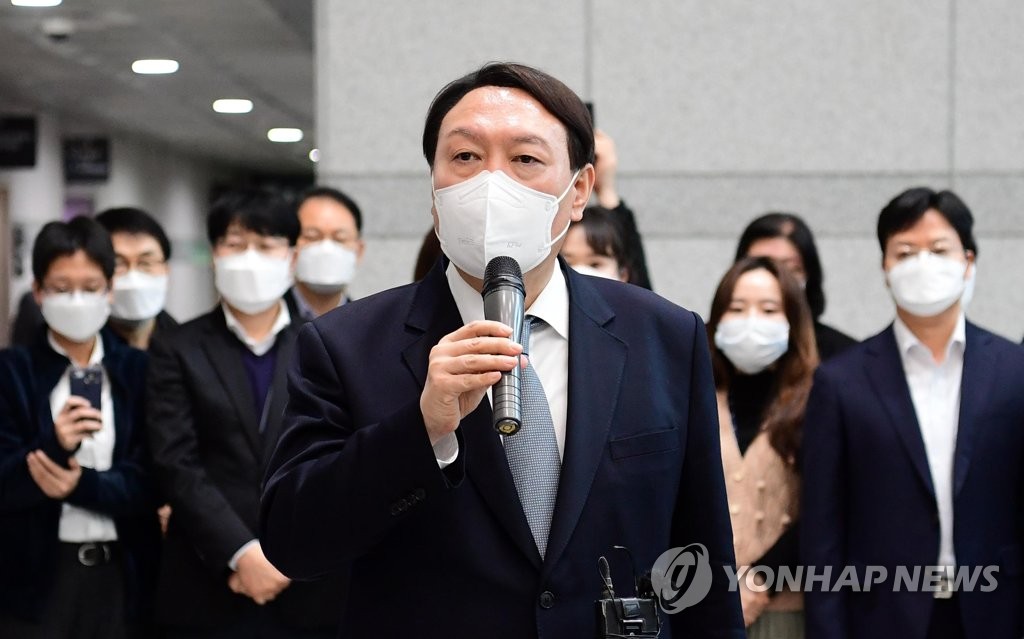 It is the first time that Yoon's support rate has topped 30 percent in Realmeter polls, though his popularity rate has already approached 40 percent in surveys by other local pollsters.

Yoon resigned from the top prosecution post in early March in protest of the Moon administration's prosecution reform drive. The former top prosecutor has led in many other recent polls on who is fit to win the next presidential election slated for March next year, though he has never declared political ambitions. A poll by the Korea Society Opinion Institute, released a week ago, showed Yoon's support rate reaching almost 40 percent.

According to Realmeter, Yoon's popularity rate marked an 18.9 percentage-point jump from 15.5 percent in its previous poll conducted the previous month.

Rep. Lee Nak-yon, former chief of the ruling Democratic Party, who was tied with Yoon for second place in the previous Realmeter poll, suffered a decline of 3.6 percentage points to 11.9 percent this month.

Realmeter officials said Yoon's popularity has soared by more than 20 percentage points among conservative and moderate-minded voters, and in the southeastern city of Daegu and the surrounding North Gyeongsang Province, as well as the central provinces of Chungcheong and the city of Daejeon.

In particular, Yoon's popularity nearly tripled in the Chungcheong region, where his father was born and raised, the pollster noted.

Among opposition politicians, Oh Se-hoon, the Seoul mayoral candidate from the main opposition People Power Party, and independent lawmaker Hong Joon-pyo were supported by 4.5 percent each of Realmeter poll respondents, with Ahn Cheol-soo, the leader of the conservative minor People's Party (PP), posting a support rate of 3.8 percent.

The poll had a confidence level of 95 percent with a margin of error of plus or minus 1.9 percentage points. 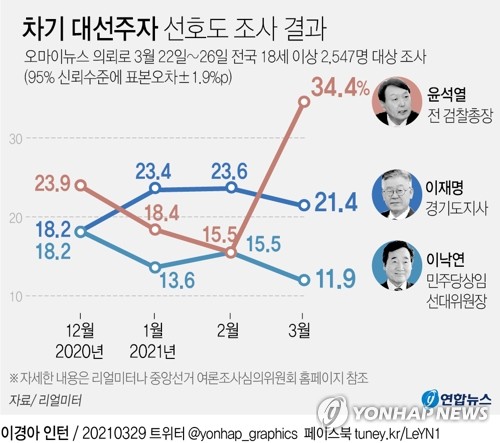