The rapper, whose legal name is Park Chan-yeol, will enter a boot camp for four weeks of basic military training ahead of serving in the Army, according to SM Entertainment. The agency did not elaborate further on the venue and schedule of the enlistment.

He is the fifth EXO member to enlist in the military. Xiumin and D.O. have already completed the service and were officially discharged, while Chen and Suho started their duty last year.

All able-bodied South Korean men are required to serve in the military, for about 18 months if enlisted in the Army. 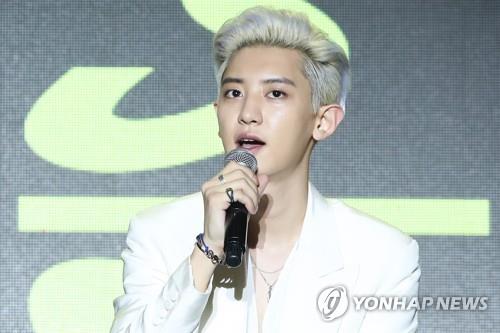 Chanyeol debuted in 2012 as a member of EXO, a K-pop act popular here and abroad with a number of megahit songs, including "Growl," "Call Me Baby" and "Love Shot."

He has also participated in the group's hip-hop subunit project EXO-SC and pursued an acting career as well.

In October, however, he faced allegations of cheating after a person who claimed to be his ex-girlfriend first raised the issue online.

Last month, Chanyeol issued a written apology on a fan community, saying that he will "contemplate how he can repay (fans) for their support and affection."