SEOUL, March 29 (Yonhap) -- The defense ministry said Monday it extended the current social distancing rules for the military, which allow service members to vacation in a limited manner, for another two weeks.

In mid-February, the ministry lifted a vacation ban for enlisted soldiers that has been in place for over two months, as it lowered the antivirus level by one notch to the third-highest Level 2 in its five-tier alert system.

"We've decided to extend the current scheme until April 11 in line with the government's guidance," a ministry official said.

Under the Level 2 scheme, troops are allowed to go on vacation while strictly adhering to antivirus measures, such as a mandatory quarantine and coronavirus tests. Up to 20 percent of members of each base can take leave at the same time, according to the ministry.

But staying out overnight and meeting outside visitors are banned in principle, it added.

The government extended the current Level 2 social distancing rules in the greater Seoul area and Level 1.5 for the rest of the country on Monday for another two weeks until April 11 amid persisting concerns over a resurgence in new infections.

Up until 10 a.m. Monday, the military reported 648 COVID-19 patients among its population. 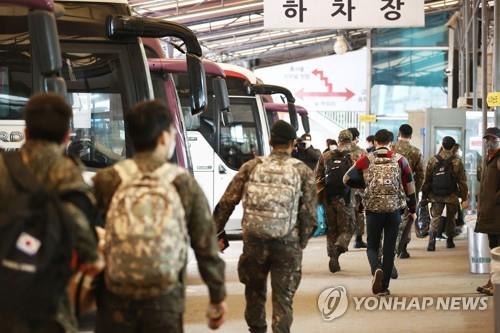