Chung and Kamilov agreed to cooperate closely to seek full-fledged negotiations on a two-way goods trade deal and prepare for events marking the 30th anniversary next year of the establishment of bilateral ties.

The two countries declared the launch of the negotiations on the trade deal during a virtual summit between Presidents Moon Jae-in and Shavkat Mirziyoyev in January.

Chung used the talks to ask Uzbekistan to send a senior official to the Partnering for Green Growth and the Global Goals (P4G) summit that Seoul plans to host virtually in May.

The two sides also agreed to cooperate in seeking an early visit to Seoul by President Mirziyoyev. In 2019, Moon invited him to visit Seoul.

Kamilov expressed his support for Seoul's efforts for the denuclearization of the Korean Peninsula and improve inter-Korean relations. 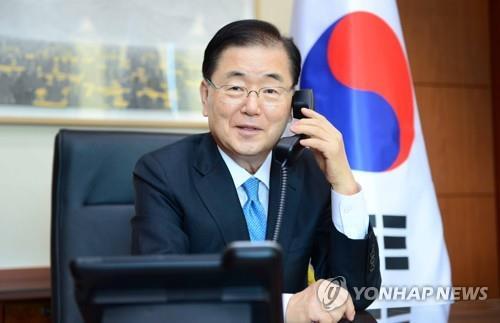