WASHINGTON, March 29 (Yonhap) -- U.S. President Joe Biden does not intend to meet with North Korean leader Kim Jong-un as his approach to Pyongyang will be "quite different," the White House said Monday.

During a press conference on Thursday, Biden said that the United States would respond accordingly if the North escalates tensions in the wake of its recent missile tests and that he is also prepared for some form of diplomacy.

"I think his approach would be quite different, and that is not his intention," White House spokeswoman Jen Psaki told a press briefing in response to a question of whether Biden's diplomacy includes sitting with the North Korean leader. 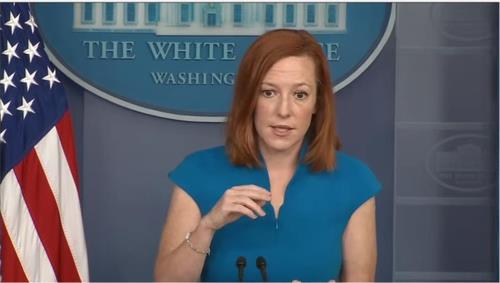 Psaki's remarks reaffirmed Biden's pursuit of an approach different from that of former President Donald Trump, who had sought progress in Pyongyang's denuclearization through direct leader-to-leader engagement.

At Thursday's press conference, Biden signaled openness to diplomacy with the North but made clear that "it has to be conditioned upon the end result of denuclearization."

The U.S. is expected to complete its review of policy on the North after National Security Advisor Suh Hoon, and his U.S. and Japanese counterparts, Jake Sullivan and Shigeru Kitamura, respectively, meet in Washington this week for talks on a coordinated strategy on the regime.

Biden does not intend to meet with N.K. leader: White House

Biden does not intend to meet with N.K. leader: White House