Lee Seok-hee told shareholders that SK hynix is committed to becoming the global leader in the NAND industry with the acquisition of Intel's NAND business and its 2018 investment in Japan's Kioxia Corp.

"SK hynix has strength in mobile NAND, while Intel's forte is in the enterprise SSD sector, so we can create and maximize the synergy," Lee said at the company's annual shareholders meeting at its headquarters in Icheon, south of Seoul. 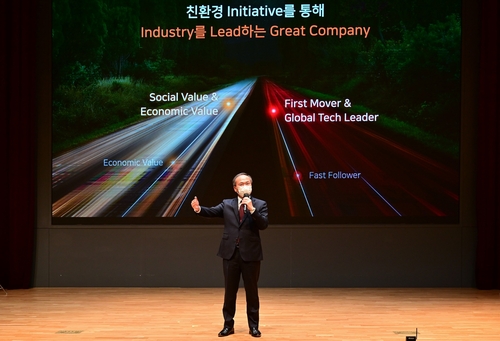 As of the fourth quarter of 2020, SK hynix ranked fourth in the NAND market with a revenue share of 11.6 percent, while Intel took the sixth spot with 8.9 percent, according to data from market researcher TrendForce.

Samsung Electronics Co. topped the ranking with 32.9 percent, followed by Kioxia with 19.5 percent.

"We are thinking of a plan on building R&D infrastructure across various regions including the United States and Europe," Lee said. "We will also find promising companies in the sectors like artificial intelligence (AI), autonomous driving and 5G to make investments."

Meanwhile, SK hynix said its board has appointed Vice Chairman Park Jung-ho as co-CEO of the company following its meeting.

Park, who also heads the country's top mobile carrier, SK Telecom Co., will be in charge of building the corporate culture and exploring new growth opportunities, according to SK hynix, while its current CEO Lee will be responsible for development and operation of the firm.

With Park's appointment, SK hynix said Ha Yung-ku, who previously served as CEO of Citibank Korea Inc., will serve as the chair of the board.