In 2018, he hinted that the telecom operator, which holds major stakes in tech units from SK hynix to e-commerce firm 11Street Co., would seek to be reborn into a holding company.

Investors have been receptive to SK Telecom's long-awaited changes, with shares in SK Telecom rising 8 percent since last Wednesday, before Park's announcement, to 268,500 won (US$236) on Tuesday.

The telecom operator's governance change has been widely expected this year as toughened laws governing a holding company are set to take effect next year. 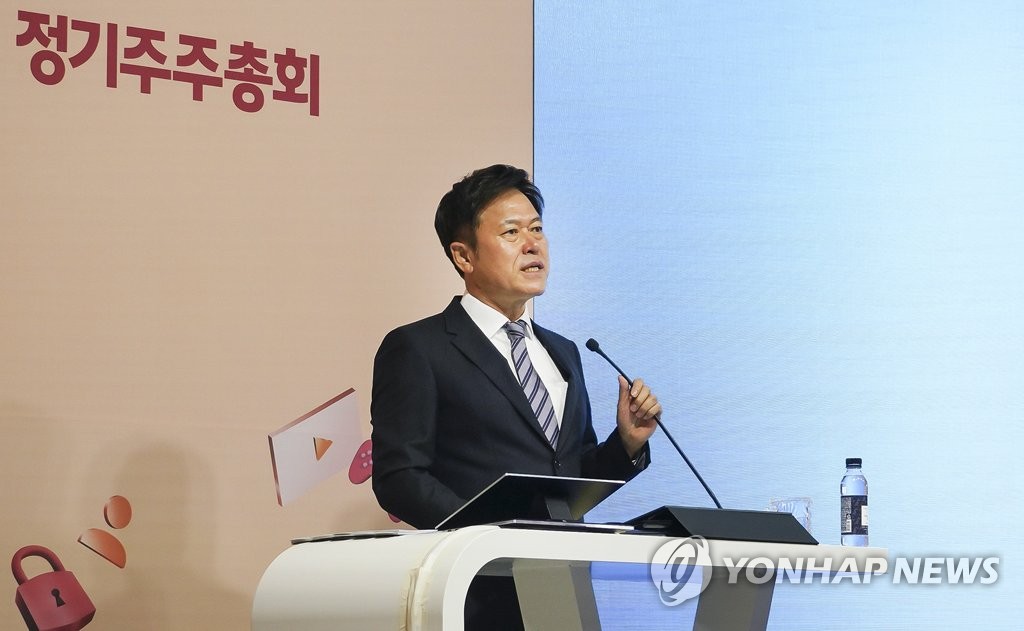 Under the revised law, a newly established holding company should hold a stake of 30 percent or more in publicly listed subsidiaries, up from the current 20 percent, putting pressure on SK Telecom to speed up plans for governance changes.

"SK Telecom, which currently owns 20.1 percent of SK hynix, will need to spend nearly 10 trillion won to raise its stake to 30 percent (next year), so SK Telecom has to hurry up to become a holding company within this year," eBest Investment & Securities analyst Lee Seung-woong said in a recent report.

As of Tuesday, SK hynix's market cap on the local bourse KOSPI stood at 98 trillion won, second only to Samsung Electronics Co., while that of SK Telecom reached 22 trillion won.

Despite details of the governance revamp being kept under wraps, analysts have predicted that SK Telecom could choose to separate its traditional telecom business via a spinoff, with its non-telecom businesses expected to become an entity serving as a holding company for SK hynix and other subsidiaries.

While Park said the governance changes aim to boost shareholder value, experts and analysts view them as the initial step to resolve a yearslong issue for the wider SK Group: tightening its grip on the group's crown jewel SK hynix.

The global memory chip powerhouse's war chest is currently shackled by local regulations due to its status as a second-tier company in the conglomerate headed by Chairman Chey Tae-won.

Under South Korea's fair trade law, second-tier subsidiaries are limited to wholly owning local subsidiaries, restricting SK hynix from active mergers and acquisitions within the country, according to Park Sang-in, a professor of public enterprise policy at Seoul National University.

Currently, SK Holdings Co., the holding company for the conglomerate, owns 26.8 percent of SK Telecom, which in turn holds a 20.1 percent stake in SK hynix.

While the memory chip maker had a smaller presence in the group when the mobile carrier acquired its stake for 3.4 trillion won in 2011, its wielding has rapidly expanded, with net income reaching 4.8 trillion won last year.

"SK hynix serves as the group's cash cow but faces limitations due to its status," the professor said. "SK Group's goal will likely be transforming SK hynix into a first-tier subsidiary."

The telecom operator will likely have to merge its new holding company with SK Holdings, so that the memory chipmaker would directly be under the wing of the conglomerate's holding company, according to experts.

"There would be no reason for SK Telecom to conduct a spinoff if the new holding company does not merge with SK Holdings," Hana Financial & Investment analyst Kim Hong-sik said. "The goal is for Chairman Chey to control SK hynix directly through SK Holdings as it has grown to become the center of the group."

But such a move could still be a long way off.

"For the major shareholder (Chey), this is not an urgent issue," Yuanta Securities Korea analyst Choi Nam-kon said. "There is no immediate problem for the group if SK hynix remains a second-tier subsidiary."