SEOUL, March 31 (Yonhap) -- The former head of the ruling Democratic Party (DP) on Wednesday made a public apology in admission of the overall failure in the party's housing policy and a recent bombshell land speculation scandal involving public servants.

The so-called LH scandal was triggered earlier this month when two civic groups alleged that employees at the Korea Land and Housing Corp. (LH) bought plots of land in two cities -- Gwangmyeong and Siheung in Gyeonggi Province -- before the government announced a massive development plan there possibly based on insider knowledge.

The scandal has dealt political blows to both President Moon Jae-in and the DP amid the yearslong futile policy attempts by the DP and the government to curb skyrocketing housing prices, especially ahead of crucial mayoral by-elections in Seoul and Busan in April.

Rep. Lee Nak-yon, the former DP chief who is currently co-chairing the party's election committee for the upcoming April 7 by-elections, said he was "painfully aware of the rage and disappointment" felt by the public about the LH scandal. 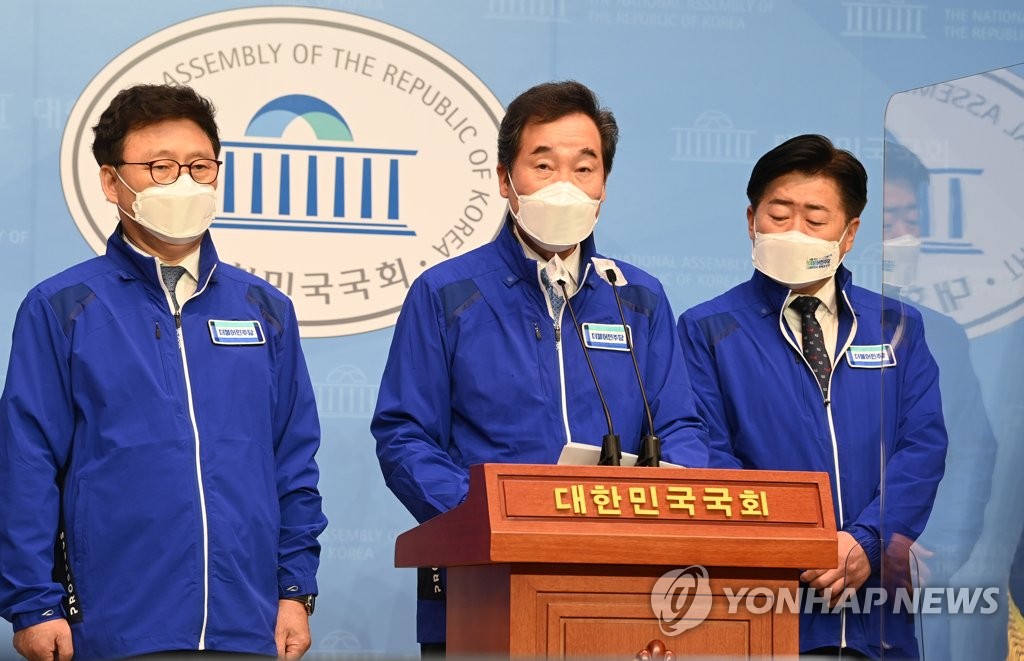 "I'm also well aware that the public's rage isn't just due to the LH scandal. The young and common people have almost given up on trying to buy a home of their own from savings," Lee said at a press conference held at the National Assembly.

Lee, who served as the first prime minister under Moon, then stated he "apologizes with a sense of infinite responsibility" for inflicting "deep despair" on average citizens who have lived honestly and diligently.

The former DP chief promised to bring an end to the scandal by sternly punishing civil servants found to have purchased land for speculation and adopting measures to prevent any recurrence.

Lee's apology came at a time when DP candidates in the Seoul and Busan mayoral races were lagging far behind in public opinion polls against their rival from the main opposition People Power Party (PPP).

According to the survey conducted on 842 voters in Seoul on Sunday and Monday by Hangil Research, 60.1 percent of the respondents said they will vote for PPP candidate Oh Se-hoon in the April 7 Seoul mayoral by-election. Only 32.5 percent said they will opt for DP's Park Young-sun.

In a related Hangil poll of 811 voters in Busan, the second-largest city, 56.7 percent of the respondents said they will vote for the PPP's Park Hyung-jun, while 34.5 percent opted for ruling party candidate Kim Young-choon.

The polls, commissioned by Maeil Business Newspaper and MBN, have a 95 percent confidence level, with a margin of error of plus or minus 3.4 percentage points.

Wednesday's apology was the latest in the string of mea culpa statements from key members of the ruling party, apparently stoked by fears of losing confidence from moderate voters in races that appear to be increasingly leaning toward opposition victories.

Rep. Kim Min-seok, a co-chair of the DP's election committee, also wrote on Facebook that the party "was insensitive to the public sentiment and the people's livelihoods, and was also inadequate in owning up to mistakes."

"We need to apologize more if needed," another member of the DP leadership said. "We can only turn the people's hearts by bowing down further and make the public understand that we are truly sorry," the person added.

Some members of the DP have suggested the party needs to apologize again for the sexual harassment allegedly perpetrated by Park Won-soon, the late liberal Seoul mayor who died in an apparent suicide following accusations of sexual misconduct toward his former secretary.

"When looking at the situation from an extreme perspective, we shouldn't have put out a candidate in the Seoul and Busan elections. But since we did, it is only right for us to repent for having provided reasons for the elections in the first place," one DP lawmaker said.

As a major political event in the lead-up to the 2022 presidential election, the DP decided to field candidates in the April by-elections after putting the matter to a vote among registered party members in November.

The decision was against an internal party rule prohibiting the party from fielding candidates in any by-election caused by "serious wrongdoing" by DP members elected to offices. The Busan chief seat is also vacant after Mayor Oh Keo-don also resigned from sexual harassment allegations last April.