SEOUL, April 1 (Yonhap) -- South Korea's exports advanced 16.6 percent in March from a year earlier on the back of solid demand for chips and autos to extend their gains for the fifth consecutive month, data showed Thursday, stoking speculation that recovery in Asia's fourth-largest economy is gathering pace.

Outbound shipments came to US$53.8 billion last month, compared with $46.1 billion a year earlier, according to the data compiled by the Ministry of Trade, Industry and Energy. 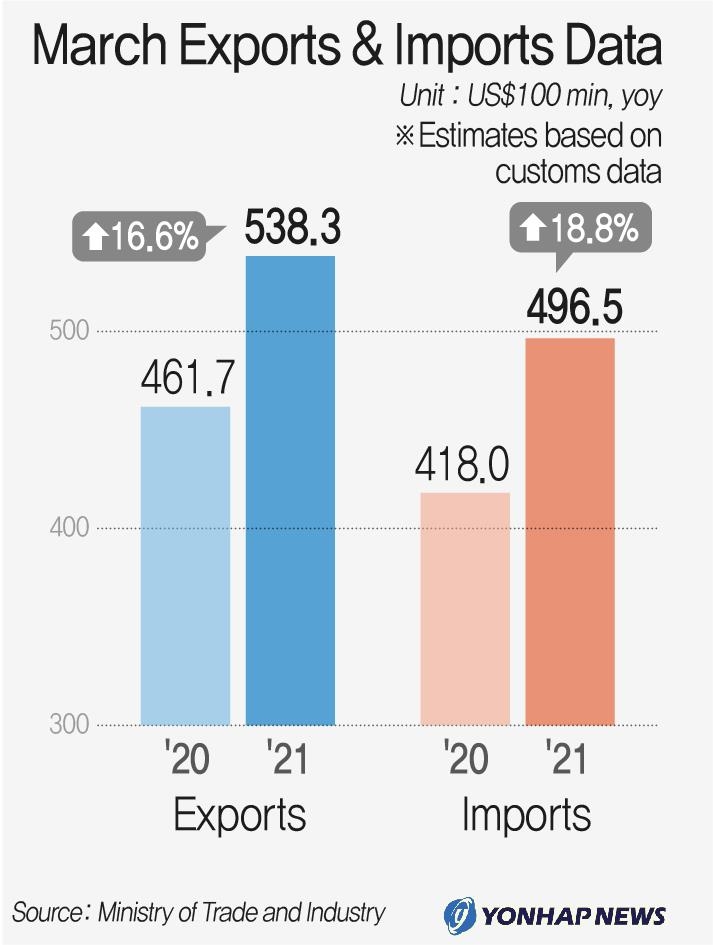 The latest figure was slightly lower than the market estimate. According to a poll by Yonhap Infomax, the financial arm of Yonhap News Agency, the country's March exports were expected to have risen 18.3 percent on-year.

Even considering the base effect, the latest figure is significant as it was the highest in history for any March, according to the ministry.

The growth was largely led by exports of chips, which increased 8.6 percent to reach $9.51 billion, the highest reading in 28 months. Chips accounted for roughly 18 percent of the monthly exports.

The growth came as global data centers expanded their servers, with the average price of chips gathering ground on supply shortages.

The booming global foundry industry also led to stronger demand for South Korea's exports, according to the ministry.

Exports of automobiles jumped 15.3 percent to hit $4.4 billion, the highest in more than four years.

Despite growing concerns over shortages of automotive chips, auto exports were able to extend gains for a third month on strong demand for premium models including sports utility vehicles and electric cars.

Shipments of rechargeable batteries rose 23.5 percent on the back of the green energy drive of the new U.S. administration.

On the back of the recovery of global crude prices, exports of petroleum products reported the first growth in more than two years, advancing 18.3 percent to $2.7 billion.

Outbound shipments of ships soared a whopping 63.9 percent to $2.3 billion as local shipbuilders clinched a series of major deals.

Exports of biohealth products grew 43.6 percent over the period on solid demand for COVID-19 test kits. 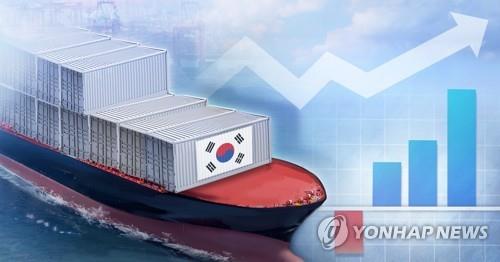 By destination, exports to China, the top trading partner, advanced 26 percent on a base effect. The recovery of Asia's No. 1 economy led to more demand for South Korean construction equipments as well.

Shipments to the United States jumped 9.2 percent amid growing hope over the recovery of consumer sentiment on stimulus packages. Shipments of auto parts gathered ground as production lines in North America were normalized.

Exports to Southeast Asia gained 10.8 percent on the economic recovery in the region.

"Global trade is recovering, and the chip industry is expected to enjoy a boom down the road as well. The rising crude price is also a positive factor," Moon Dong-min, a deputy minister for trade and investment, said.

"But there are still uncertainties over lingering protectionism," he added.

The latest congestion at the Suez Canal had only a limited impact on exports in March, the official said.

Moon added the global shortages of automotive chips, however, may partially limit exports of cars in April.

In February, the country's exports shot up 9.5 percent on-year also on the back of robust shipments of chips, autos and other key products.

In 2020, the country's outbound shipments came to $512.8 billion, down 5.4 percent from 2019. The South Korean economy suffered a 1 percent retreat last year, marking the sharpest-ever contraction since the 1997 financial crisis.

The central bank estimated earlier that the economy is expected to recover from the COVID-19 pandemic at a faster pace than expected this year. In February, the central bank revised up its 2021 growth forecast for exports to 7.1 percent from its estimate in November of 5.3 percent.

(3rd LD) Exports up for 5 months in March, recovery likely to be further extended

(3rd LD) Exports up for 5 months in March, recovery likely to be further extended