The Supreme Prosecutors Office (SPO) said it worked with the customs office to confiscate 16.4 kilograms of methamphetamine shipped into the country from Malaysia in January-March and shared criminal information and drug trafficking methods with Kuala Lumpur's police.

Based on the intelligence, Malaysian police apprehended 13 members of an international drug trafficking organization based in its capital. They also seized illicit drugs worth 5.42 billion won (US$4.78 million), including 64 kg of ketamine and 12.2 kg of methamphetamine, as well as the cartel's production facility.

One of the arrested cartel members was found to have trafficked 8.2 kg and 7.6 kg of methamphetamine seized by Incheon and Cheongju's district prosecutors offices, respectively, in January last year, according to the SPO. 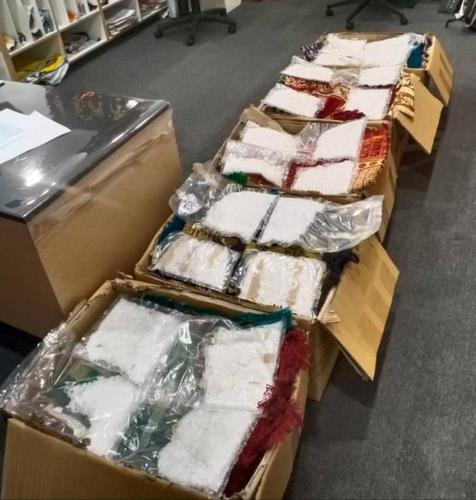 The prosecution said the confiscated amount of methamphetamine sent from the Southeast Asian country sharply rose from 3.6 kg in 2020 to 16.4 kg as of the first quarter this year. In 2018 and 2019, a combined 40 kg of the addictive drug were seized here.

Cases of people carrying drugs on flights had dropped due to strengthened immigration procedures amid the pandemic, but cases of narcotics smuggled through international shipping or Express Mail Service (EMS), hidden in clothes or food, have increased.

To crack down on such crimes, officials have beefed up surveillance of deliveries from Malaysia and swiftly shared acquired information, such as identification of consignors, with foreign police, the prosecution explained.

"Had the recent roundup of the drug cartel not succeeded, additional crimes would likely have broken out in Korea," the SPO said, explaining it was crucial to prevent the narcotics from crossing the border in the first place as most of them come from abroad.

As part of its anti-drug trafficking drive, the SPO said it is conducting a joint probe into drug crimes with Thailand and plans to strengthen cooperation with Laos's investigative authorities to block drug trafficking to Korea. 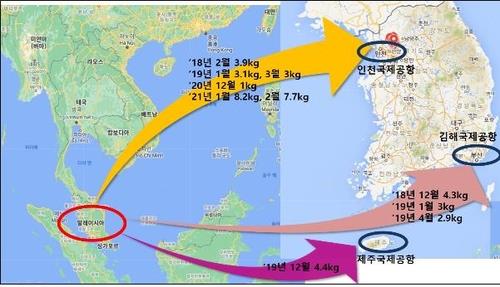