The nation's five major lenders -- KB Kookmin, Shinhan, Woori, Hana and Nonghyup -- had 483.2 trillion won (US$427 billion) in outstanding home-backed loans as of end-March, up 3.4 trillion won from the previous month.

March marks the second consecutive month that their combined mortgage lending has climbed by a number in the 3 trillion-won range. February saw an on-month increase of 3.8 trillion won.

The March increase came despite a hike in bank lending rates. According to central bank data, average bank mortgage rates rose to 2.66 percent in February from 2.63 percent in January, the sixth straight month of increase.

Industry watchers said local lenders have jacked up risk spreads on loans in an effort to rein in the growth pace of household lending amid rising benchmark rates.

In contrast, those banks' outstanding unsecured loans came to 135.4 trillion won as of the end of March, up only 200 billion won from the previous month.

Credit loans to individuals declined by 55.6 billion won in February after spiking by some 1.6 trillion won in January.

As of end-March, household loans extended by the major lenders stood at 681.6 trillion won, 3.5 trillion won more than the prior month. 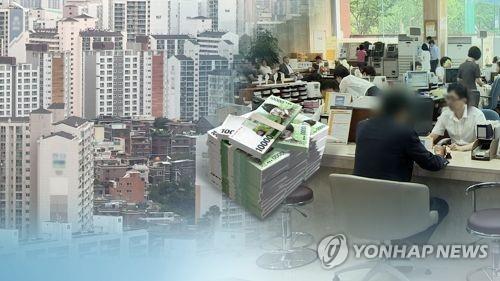