In Gallup Korea's survey of 1,000 adults nationwide conducted from Tuesday through Thursday, only 32 percent gave a positive assessment of Moon's presidency, down 2 percentage points from the previous week and the lowest since his inauguration in 2017.

But 58 percent negatively assessed Moon's presidency, marking a fall of 1 percentage point from a week earlier, the poll said. 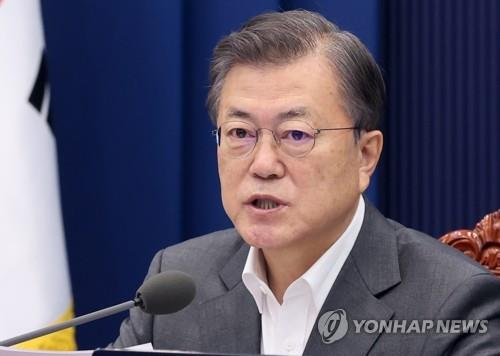 Moon's approval ratings from liberal, moderate and conservative voters were 55 percent, 32 percent and 14 percent, respectively. In Seoul, the president garnered an approval rate of 35 percent.

Forty percent of those who negatively assessed Moon's performance complained about his government's real estate policy, the poll said.

It also found 35 percent of the respondents want a ruling party candidate as winner of the nation's next presidential election slated for March next year, compared with 52 percent supporting a win by an opposition candidate.

The poll has a margin of error of plus or minus 3.1 percentage points, with a confidence level of 95 percent.