SEOUL, April 3 (Yonhap) -- Apparently, the results of the upcoming Seoul and Busan mayoral by-elections would have a marked impact on President Moon Jae-in's final months of leadership.

If the ruling Democratic Party (DP) wins, it is expected to provide a much-needed boost to his beleaguered presidency. In the case of defeat, it will lose momentum further, with the specter of a lame duck waddling into public view.

Moon would come under increased pressure to veer away from his key policy approach less than a year before a far more important election to pick his successor.

A dilemma is lack of progress in his signature policy drive to improve inter-Korean ties and pave the way for lasting peace on the Korean Peninsula. COVID-19 is still a headache.

Residents in South Korea's two largest cities have been going to the polls since Friday morning in the two-day advance voting prior to the April 7 elections. 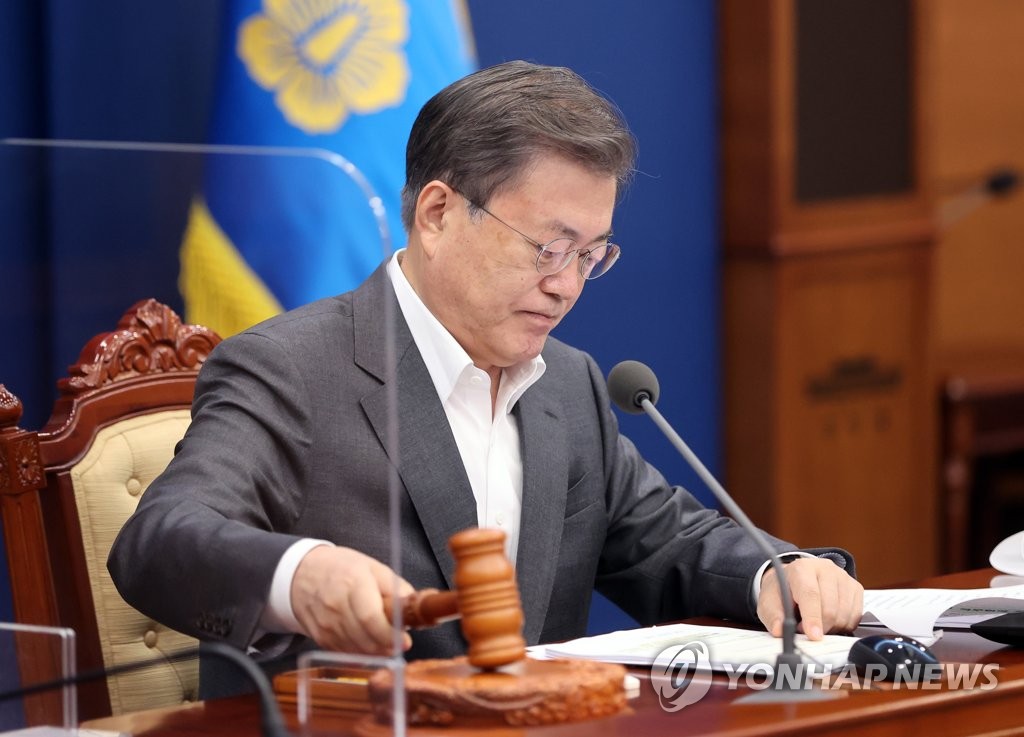 Whatever the outcome, it heralds a high-profile political realignment, which is not unusual here especially in the run-up to presidential election. The nation's next president will be decided on March 9, 2022, with Moon banned from seeking re-election under the Constitution.

Next week's by-elections are regarded as a barometer of public sentiment toward the four-year-old Moon administration and a bellwether of a shift in the country's political landscape. Also at stake is the future of some presidential hopefuls.

Many place their bets on the possibility that the DP will be beaten this time, perhaps crushingly.

"The by-elections are being dominated by the underlying public sentiment to punish the Moon administration," Park Sung-min, a veteran political consultant, said. 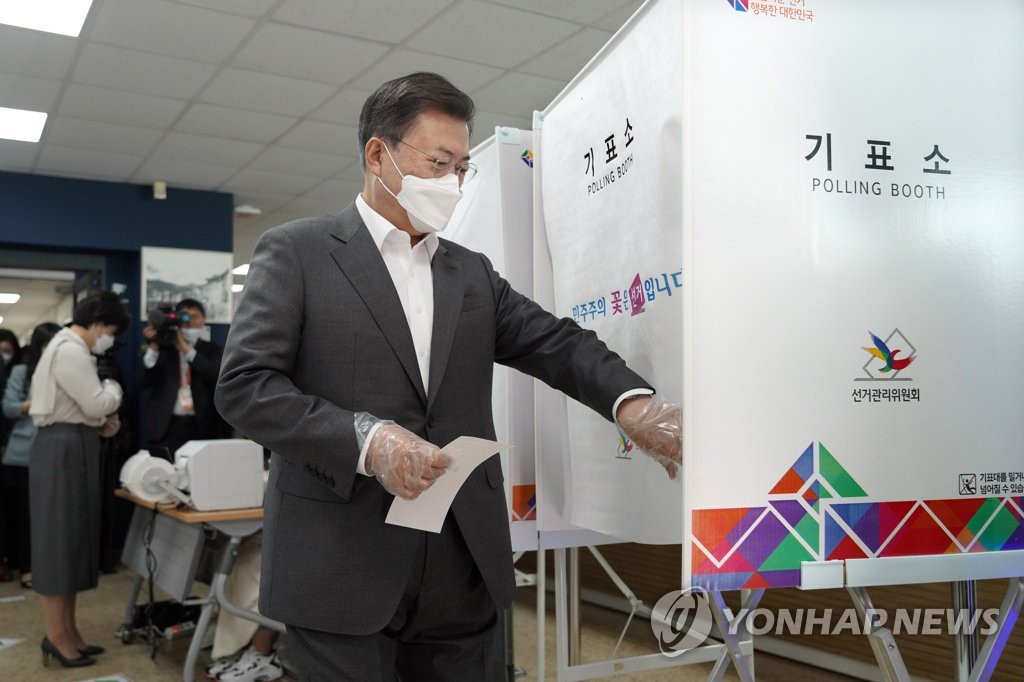 Voters, disappointed with Moon and the DP, are more determined to send a clear warning sign than to safeguard them, he added.

"In elections, a more desperate side wins," Park, who runs the MIN Consulting firm, said. "The pretext of liquidating social malpractices (laid bare under the previous Lee Myung-bak and Park Geun-hye administrations) is no longer working."

It was behind the DP's landslide victory in the 2020 parliamentary elections. Moon also capitalized on South Korea's early-phase accomplishments in the fight against the coronavirus. His approval rating stood at 59 percent in Gallup Korea's tracking survey just ahead of the April 15 general elections.

That is not the case anymore. Moon's popularity has been on the wane.

His approval rating hit another record low of 32 percent in the pollster's survey earlier this week. Public support for the DP has also taken a nosedive.

To say nothing of swing voters, those in their 20s, 30s and even 40s, many of whom had long championed Moon and the DP, are increasingly turning their back on the ruling bloc, a number of opinion polls show.

What is notable is the disappearance of so-called Moon Jae-in marketing in the party's election campaign.

The DP's Seoul mayoral candidate, Park Young-sun, meets citizens, wearing a sky-blue bomber jacket without the DP's logo. She does not mention the president any more on her campaign trail.

Park continues to lag behind her rival Oh Se-hoon of the main opposition People Power Party (PPP), who served as Seoul mayor a decade ago, by the margin of more than 20 percentage points, according to a joint survey conducted at the end of March. It was commissioned by three major broadcasters: KBS, MBC and SBS. Since Friday, the National Election Commission has prohibited the findings of such private polls on the by-elections from being made public.

Park is trying hard to convince voters of her own "competitiveness" to become the first-ever female Seoul mayor. She cites her career as a former four-term lawmaker and minister of SMEs and startups.

In Busan, Park Heong-joon of the PPP is well ahead of Kim Young-choon of the DP.

Analysts agree that the massive land speculation scandal involving employees at the state housing corporation, called LH, was a game changer in the election battle, in which the rival parties were once neck and neck.

It has fueled pent-up public fury over the left-leaning government's real estate policy failures. Home prices and rent have kept skyrocketing in Seoul and other major cities nationwide under the Moon administration.

Real estate is a highly sensitive issue directly linked with Moon's key policy agenda of enhancing social equality and fairness, as highlighted in his inauguration speech. "Everyone will have equal opportunities. The process will be fair, and the result will be righteous," he stated.

The LH case, disclosed in early March by civic groups, has also raised doubts about Moon's push for expanding the public sector's role. The number of civil servants has significantly increased since he took office in May 2017. Public fatigue has grown over long-running conflicts and disputes on the Moon government's reform crusade against the powerful state prosecution service.

Both Moon and the DP have apologized repeatedly in public over the real estate problem, but to no avail.

The DP says, nonetheless, that the by-elections are too early to call, as it strives to persuade more of its supporters to cast ballots without giving up. DP officials argue that one day in an election season is equivalent to a month in other times.

Whether the party's last-gasp bid for a come-from-behind triumph will bear fruit remains to be seen.

If successful, it would help Moon's presidency regain some traction and enable him to concentrate on securing "inclusive" economic recovery and improving the people's livelihoods amid the pandemic, as he pledged in his New Year's address.

Otherwise, it will likely deal a serious blow to his leadership and may even put him on the verge of becoming a lame duck, observers say.

Through the end of his tenure, Moon will be dogged by such issues as fairness, anti-corruption and real estate policy, which are expected to top the presidential election agenda.

In the cards is carrying out an early Cabinet reshuffle to replace Prime Minister Chung Sye-kyun and several ministers, including Finance Minister Hong Nam-ki.

It is an open secret that Chung is preparing to throw his hat in the ring for presidency.

Asked about the matter during a press briefing Thursday, Chung said, "In due time, I think there will be an opportunity to speak about it. But I am not ready yet (to do so)."

Hong, who doubles as deputy prime minister for economy, is said to be interested in the Gangwon gubernatorial competition.

The timing and scale of a Cabinet shake-up will likely be swayed by voters' choice next week.

Many anticipate considerable changes as well in the post-election political landscape. 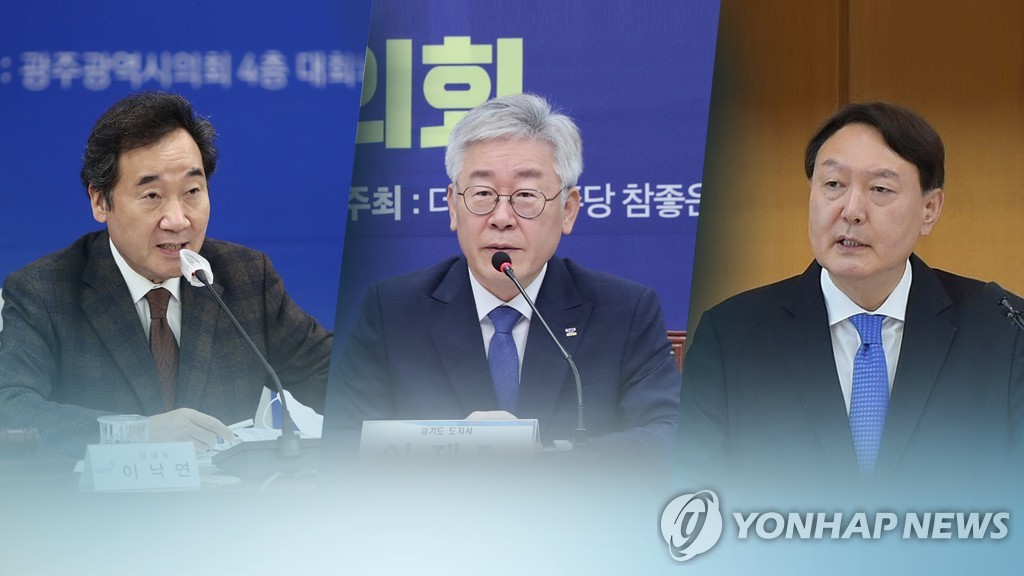 The DP's victory would revitalize the presidential bid of its former leader Lee Nak-yon, with public support for him sagging in recent months. He has been spearheading the party's overall by-election campaign.

Under the scenario, the PPP may be confronted with a crisis of collapsing or falling apart, portending an upheaval in the political forces critical of Moon.

The pendulum will swing immediately to Yoon Seok-youl, a former prosecutor general and front-runner in various polls on likely presidential candidates, even though he has yet to declare his political ambition.

If the DP loses, former Prime Minister Lee's presidential bid would suffer a critical setback. The party's acting chief and floor leader, Kim Tae-nyeon, will face pressure to step down amid ferocious calls for a caretaker leadership, formally named an "emergency response committee."

"The party may be drawn into an internal rift over responsibility for the election defeat and measures for innovation," Yun Tae-gon, a researcher at the MOA think tank, said. "As a ruling party with 174 seats (in the 300-member National Assembly), the DP has little cause for blaming the opposition or other political circumstances."

The DP's post-election trouble, in contrast, may offer an opportunity for Gyeonggi Province Gov. Lee Jae-myung, a leading presidential hopeful of the party, to get his political stature enhanced as its potential savior. For now, he does not belong to the DP's inner circle close to Moon.

The PPP will solidify its position as the pillar of the opposition forces, with expectations elevated for a power transition probably in strategic partnerships with Yoon and Ahn Cheol-soo, head of the minor opposition People's Party. The PPP and Ahn's party seem to be on course to merge.

Local media describe such an envisioned broader "anti-Moon coalition" of the PPP, Yoon and Ahn as a "big tent."

Especially drawing keen attention is the likelihood of a two-way presidential race between Yoon and the Gyeonggi governor taking shape in earnest.

The two were tied with 23 percent, respectively, in Gallup's latest favorability poll, followed by Lee Nak-yon with 7 percent, Ahn with 4 percent and independent lawmaker Hong Joon-pyo with 2 percent.