WASHINGTON, April 2 (Yonhap) -- The top security advisers of South Korea, Japan and the United States reaffirmed their countries' commitment to peace on the Korean Peninsula on Friday, pledging trilateral efforts toward denuclearization of North Korea.

They also underscored the need for full implementation of U.N. Security Council resolutions that prohibit any nuclear and ballistic missile testing by the North.

"The national security advisers shared their concerns about North Korea's nuclear and ballistic missile programs and reaffirmed their commitment to address and resolve these issues through concerted trilateral cooperation towards denuclearization," the White House said of a meeting between National Security Adviser Jake Sullivan and his South Korean and Japanese counterparts -- Suh Hoon and Shigeru Kitamura. 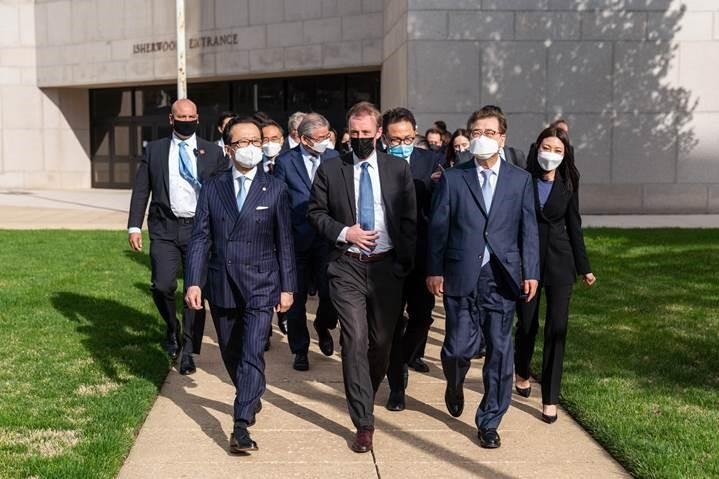 "They agreed on the imperative for full implementation of relevant UN Security Council resolutions by the international community, including North Korea, preventing proliferation, and cooperating to strengthen deterrence and maintain peace and stability on the Korean Peninsula," it added in a released statement.

Pyongyang continues to maintain a self-imposed moratorium on nuclear and long-range missile testing since late 2017.

The trilateral talks between the security advisers, held at the U.S. Naval Academy in Annapolis, Maryland, also come amid stalled denuclearization talks with North Korea.

The North has stayed away from negotiations since its leader Kim Jong-un's Hanoi summit with former U.S. President Donald Trump in February 2019 ended without a deal.

Washington earlier said Friday's meeting will provide an opportunity to explain to the Asian allies the outcome of its near-concluded review of North Korea policy, while also allowing Seoul and Tokyo to provide their own input into what will be a new U.S. approach toward the North.

"The national security advisers reaffirmed their steadfast commitment to working together to protect and advance their shared security goals," the White House statement said.

"They discussed the importance of reuniting separated Korean families, and the swift resolution of the abductions issue," it added.

The security advisers also discussed ways to cooperate in dealing with other regional and global issues, including the COVID-19 pandemic and climate change.