SEOUL, April 4 (Yonhap) -- A poll released by a state research body on Sunday showed an increase in conservatives among South Koreans for a third consecutive year.

The Korea Institute of Public Administration (KIPA) also said the number of those who consider themselves liberals fell for the second straight year.

KIPA polled 8,336 South Koreans, aged 19 and over, from September to October last year on their political leanings. The results showed that 25.7 percent of the polled said they are conservatives, up 1 percentage point from 2019. 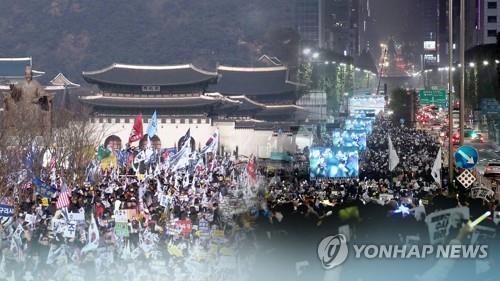 KIPA first conducted the poll on political leanings in 2013. The percentage of conservatives reached a low point at 21 percent in 2017 but has been on the rise every year since then.

That of liberals has been going in the opposite direction, touching 31.4 percent in 2018 before dropping to 26.8 percent this year.

Song Jin-mi, a researcher at KIPA, said that moderates and moderate conservatives who had leaned toward the liberal side in 2017, with then-conservative President Park Geun-hye being impeached and liberal President Moon Jae-in taking office, appeared to have returned to the more conservative side.

KIPA said there were more women than men in the moderate and conservative brackets, and more men at the opposite end.

By age and income, older respondents and those at the lower end of the income scale were more likely to identify as conservatives, KIPA added.
(END)