SEJONG, April 5 (Yonhap) -- South Korea's household debt has been rising faster than that in most major economies to reach nearly 100 percent of its gross domestic product (GDP), a report showed Monday.

The country's household debt-to-GDP ratio stood at 98.6 percent as of the end of June last year, according to the report from the Korea Institute of Public Finance.

The figure is much higher than the global average of 63.7 percent and 75.3 percent for advanced economies.

South Korea's growth pace of household debt has also been much more rapid than other countries.

Short-term debt accounted for 22.8 percent of South Korea's total household debt, much higher than 2.3 percent for France, 3.2 percent for Germany, 4.5 percent for Spain and 11.9 percent for Britain.

The United States had a short-term debt ratio of 31.6 percent, becoming the only major economy with a figure higher than South Korea.

The institute voiced concern that a rapid rise in interest rates could sharply hike household debt burdens, which may have an impact on the local economy. 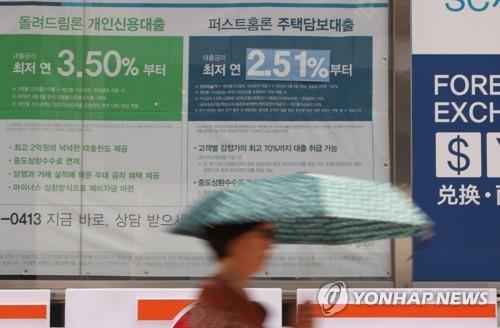