At the televised ceremony of the 2021 SAG Awards on Sunday (U.S. time), Youn was named the winner of Outstanding Performance By a Female Actor in a Supporting Role, beating Maria Bakalova for "Borat Subsequent Moviefilm," Glenn Close for "Hillbilly Elegy," Olivia Colman for "The Father" and Helena Zengel for "News of the World."

"I don't know how to describe my feelings," she said in her emotional acceptance speech. "I'm recognized by Westerners. It is very, very honorable that my actor fellows chose me as a (best) supporting actress. I'm very pleased and happy. Thank you. Thanks SAG."

She is the first South Korean actor to win the individual acting category in the award given by U.S. actors. Last year, the cast of the Oscar-winning "Parasite" clinched SAG's top prize, Outstanding Performance by a Cast, or best ensemble, but none of the actors were nominated in other acting categories.

The 73-year-old screen veteran took the role of the grandmother Soon-ja in "Minari," directed by Korean American director Lee Isaac Chung, which tells the story of a Korean immigrant family settling in rural Arkansas.

She is also nominated for best supporting actress at the upcoming Academy Awards slated for April 25, becoming the first South Korean actor to get a nod from one of the world's most coveted film awards.

The SAG Awards are one of the leading precursors for the Oscars, along with other honors hosted by filmmakers' guilds including the Directors Guild of America (DGA).

"Minari" was also nominated for best ensemble and best actor at the SAG Awards, but the awards went to the U.S. courtroom film "The Trial of the Chicago 7" and the late Chadwick Boseman for "Ma Rainey's Black Bottom," respectively. 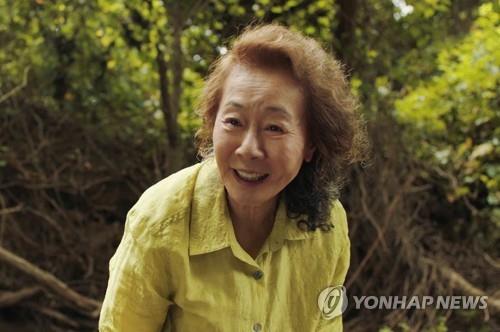