SEOUL, April 5 (Yonhap) -- LG Electronics Inc.'s withdrawal from the mobile business is likely to help its bigger rivals such as Samsung Electronics Co. expand their presence in the sector at home and abroad, industry observers said Monday, as there are limited alternatives for local consumers.

After years of money-losing performance, LG said it will close its mobile business by July 31. The decision came two months after the company hinted at exiting from its loss-making mobile communications (MC) unit.

LG's departure from the mobile phone business will further beef up Samsung's presence in the South Korean smartphone market, where it already stands atop.

According to market researcher Counterpoint Research, LG's market share in South Korea has been falling amid rumors about its departure. 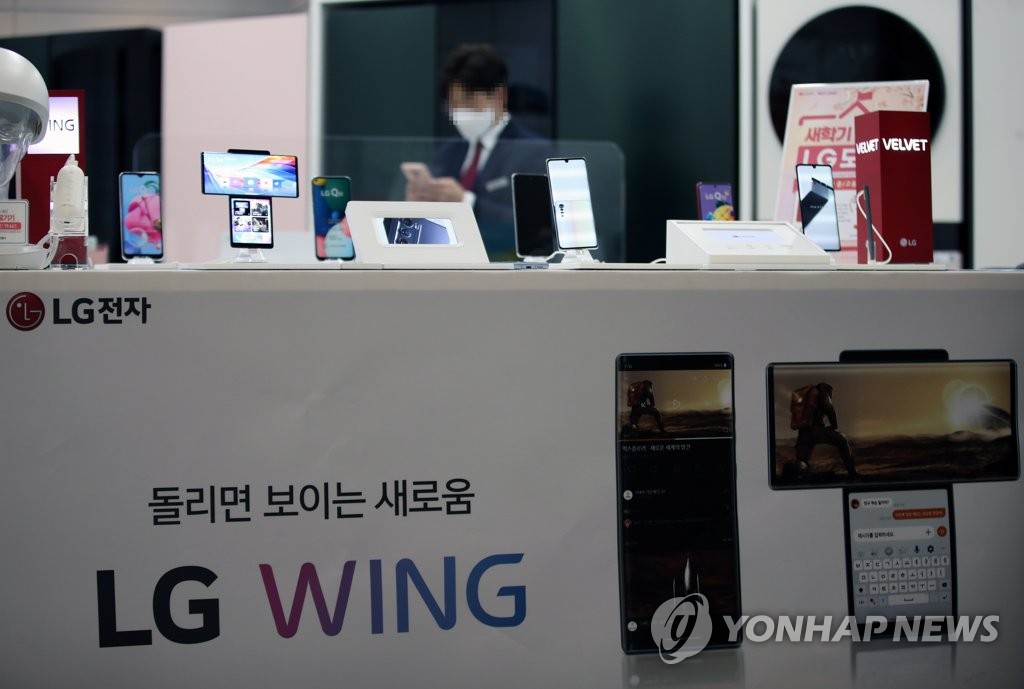 Industry observers said that LG smartphone users in South Korea are likely to switch to Samsung devices down the road since a large number of smartphone users are still more familiar with Android-powered phones instead of Apple's iPhones that use iOS mobile operating system, while Chinese brands have very little presence here.

Samsung already made its move to absorb LG customers in South Korea with its trade-in program.

The world's largest smartphone producer recently announced that old smartphone users, including those who own LG's V50 ThinQ, can trade in their devices for Samsung's Galaxy S21 series and Z foldable smartphone models.

When it comes to the global market, analysts said LG's exit will give opportunities to other players seeking more sales in the Americas as 80 percent of LG's smartphone sales came from the region.

LG was the world's ninth-largest smartphone vendor last year with a market share of 2 percent after shipping 24.7 million smartphones.

"With the competitiveness of its flagships weakened, LG's market share has a higher proportion of the mid-to-low price segment in the U.S. and Latin America," Counterpoint Research. "As a result, it faces fierce competition from brands such as Alcatel and Motorola, with Samsung's A series clearly ahead of it."

Meanwhile, despite closure of its mobile business, LG promised complete after-sales services for its smartphone owners.

"Current LG phone inventory will continue to be available for sale," the company said. "LG will provide service support and software updates for customers of existing mobile products for a period of time, which will vary by region."

Although the tech giant decided to shift its workers from the MC division to other business units, those responsible for smartphone after-sales services will remain to serve their duties at LG service centers, according to the company, adding that it has enough inventory of mobile phone components to run repair services.