SEOUL, April 5 (Yonhap) -- With only two days to go before the bellwether by-elections, conservative opposition Seoul mayoral candidate Oh Se-hoon is widely seen as having the upper hand over his rival from the ruling party, but analysts predicted that an ascent of "shy progressive" votes has the potential to swing the final election result.

Voters in Seoul and Busan will go cast ballots for the new mayors of the two biggest cities in South Korea on Wednesday in the by-elections, whose results are expected to set the tone for next year's presidential election as well as the final year of President Moon Jae-in's five-year term. Besides the two mayoral seats, two regional administrative posts and 17 seats on regional legislative councils are also up for grabs.

The latest opinion polls, disclosed before the imposition of a ban on such polls' release for one week before election day, showed Oh of the main opposition People Power Party (PPP) leading Park Young-sun from the Democratic Party (DP) by a formidable margin of about 20 percentage points.

The overwhelming opinion poll dominance by Oh signals he will likely have the upper hand over Park in the Seoul mayoral election, opinion poll analysts predicted. But Park may still have potential to flip the election in her favor, largely depending on how strongly she musters "shy progressive" votes in the runup up to election day, analysts also pointed out.

She cited the fact that the 21.95 percent turnout rate in the Friday-Saturday early voting for the Seoul mayoral poll, although a record high, was not high enough to turn the tide as the grounds for her prediction.

If the early voting turnout rate was over 25 percent, it would have indicated a result more favorable to Park, given that more liberal voters, as opposed to conservative voters, tend to vote early, she noted. 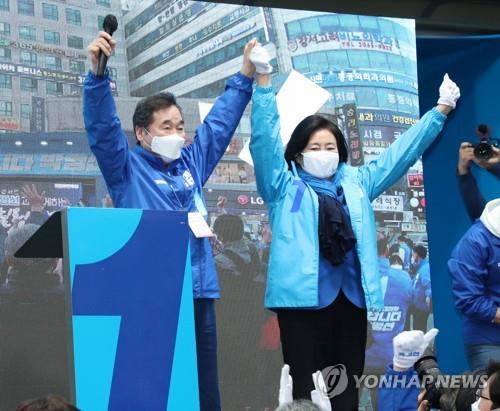 Lee Kang-yun, director of the Korea Society Opinion Institute, however, estimated that the decisive variable for the final election result may rest on how solidly reticent liberal voters, billed as "shy progressives," stand together to thwart Oh's victory in the runup to election day.

He referred to ongoing allegations surrounding former real estate assets of Oh's family in southern Seoul as a potential game changer that could flip the election against the conservative candidate.

The DP has been painting Oh as a "liar" after testimonies emerged contradicting Oh's claim that he did not exert any influence when a vast swathe of land in southern Seoul, which his family owned, was turned into a site for a large-scale state housing project while he was serving as Seoul mayor from 2006-2011.

"The honesty issue could serve as a catalyst for (awakening and) boosting traditional liberal votes although it will not sway the opinions of swing voters," Lee said. "How intensely DP supporters stand together will be the most attention-grabbing issue in the last minute before the election," he noted. 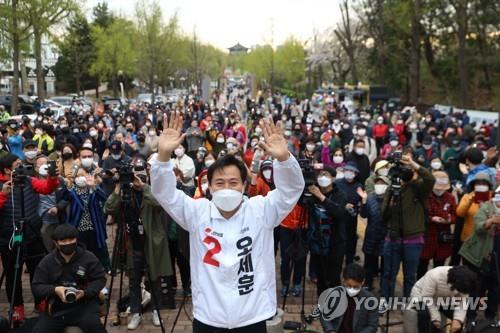 Another major determinant of the mayoral poll in Seoul is likely to be young voters in their 20s and 30s, traditionally liberal voters who have been increasingly drawn to the conservative opposition's election campaign to "pass a judgment" against the ruling liberal bloc for skyrocketing housing prices and a far-reaching land speculation scandal involving public officials at LH, the state housing developer.

The mayoral elections, especially in Seoul which is home to nearly 10 million of the country's total 52 million population, are unquestionably seen as harbingers of public opinion ahead of the presidential election set for March 2022.

A victory for the DP could provide much-needed momentum to the ruling bloc including President Moon, which has been grappling with lowest-ever public approval ratings of late.

An election defeat, on the contrary, may expedite the onset of lame duck status for Moon in his final year in office.

A triumph by the PPP, meanwhile, is expected to help the conservative bloc pave the way for reclaiming the presidency next year.

Amid such keen political interest in the upcoming by-elections, the turnout rate reached 20.54 percent for the two-day early voting conducted from Friday-Saturday, the highest reading ever for any by-election. 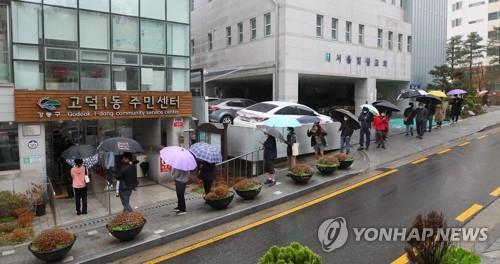