GUMI, South Korea, April 5 (Yonhap) -- The mysterious disappearance and death of two 3-year-old girls in the southeastern city of Gumi that made headlines in South Korea for months have led to the indictments of two women.

Prosecutors said Monday a 48-year-old woman surnamed Seok was indicted on charges of attempting to abandon the body of her 3-year-old daughter this year and abducting her granddaughter of the same age years ago.

The case dates back to Feb. 10, when the mummified body of Seok's young daughter, who died apparently of starvation six months earlier, was discovered at a multi-unit house of her 22-year-old daughter, surnamed Kim, in Gumi, a quiet industrial city about 260 kilometers southeast of Seoul.

At that time, the dead girl was believed to be a daughter born to Kim, who was accused of moving out of her home alone last August to remarry and was later arrested and indicted for murder and other charges. 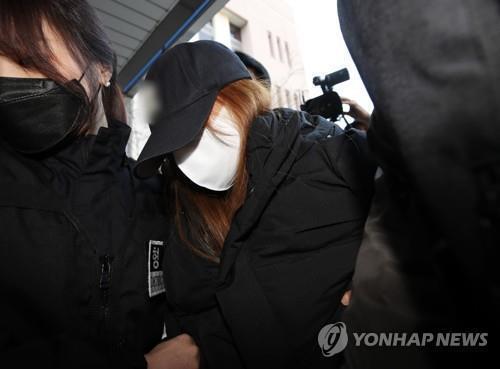 But the case took a bizarre twist in early March when it was discovered through DNA tests that Seok, who lived on a different floor of the same multi-unit house, is the biological mother of the dead girl.

Prosecutors and police suspect that Kim and Seok each gave birth to baby girls around the same time, and the elder woman may have switched the babies so her baby would be raised by her adult daughter. They have yet to discover the whereabouts of Kim's missing daughter, let alone whether she is alive or dead, in the face of stubborn denials by Seok.

The Gimcheon branch of the Daegu District Prosecutors Office in Gimcheon, near Gumi, said a DNA analysis by the Supreme Prosecutors Office, as well as three rounds of separate DNA tests by the National Forensic Service, have concluded that Seok is the real mother of the dead girl.

Seok has steadfastly denied giving birth to a baby girl, let alone other suspected offenses, while Kim has claimed that she was not aware the babies had been switched.

The prosecution also said it mostly agrees with the opinion of police investigators that the babies born to Seok and Kim were switched before their blood samples were taken at an ob/gyn clinic in Gumi.

Kim is scheduled to attend her first court hearing on her murder charges slated for Friday at a district court in Gimcheon.

Woman indicted over death of daughter, disappearance of granddaughter

Woman indicted over death of daughter, disappearance of granddaughter