SEOUL, April 5 (Yonhap) -- Prime Minister Chung Sye-kyun, a potential presidential candidate, is likely to offer his resignation as early as next week, a source said Monday.

"Chung has made up his mind to offer his resignation to President Moon Jae-in next week when he returns from a visit to the Middle East," said the source who asked not to be named. 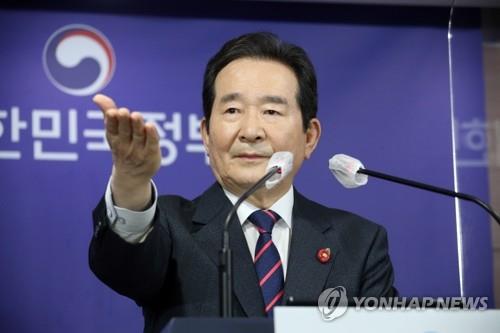 Chung is scheduled to visit Tehran to close the negotiations with Iranian officials regarding a South Korean ship was seized by Iran over three months ago.

The source said it has not yet decided whether the former parliamentary speaker will immediately return to the party or resign after parliament endorses his successor.

Among the lineup of potential successors are former Interior Minister Kim Boo-kyum and Lee Tae-bok, who previously served as a health minister.

Chung, 69, is the second prime minister under the Moon administration, succeeding Lee Nak-yon who was the longest-serving prime minister in South Korea.

Chung is one of potential presidential candidates from the ruling-party, trailing behind Lee and along with other politicians, such as Kim and Rep. Park Ju-min.