SEOUL, April 6 (Yonhap) -- South Korea is willing to cooperate with the member countries of the U.S.-led Quad forum on an issue-by-issue basis, a foreign ministry official said Tuesday, amid speculation Washington wants Seoul to join the forum seen as a counterbalance to China's influence.

Officials in Seoul have made it clear that there has been no formal request from the U.S. to join the Quad, also involving Australia, India and Japan, stressing that the country would take part in an initiative of any form as long as it serves the country's interests and helps the region prosper.

"Even if it might not be the Quad, we can seek cooperation, issue by issue, with the Quad member countries, in areas where we can contribute," the official said.

He pointed out that Seoul has already been working with the U.S. in terms of regional cooperation on a broad range of areas, and is willing to do the same with other Quad members, on such issues as climate change, the COVID-19 pandemic, transnational crimes, and maritime and cybersecurity.

"We have also been actively taking part in multilateral maritime drills in the Indo-Pacific region, like RIMPAC, Cobra Gold, Pacific Vanguard exercises, and we will consider additional participation in the future," he said.

The official dismissed concerns raised in recent media reports that Seoul's reservations about joining the Quad is making the country isolated from other partners in the region.

"It doesn't reflect the facts," he said.

"We are actively pursuing cooperation with other regional initiatives based on our own New Southern Policy," he said, referring to Seoul's key regional policy drive aimed at deepening ties with Southeast Asian nations. "We've agreed to do so with Australia, and we will pursue such cooperation with Japan and China on One Belt One Road."

During the visit to Korea last month, U.S. Secretary of State Antony Blinken described the Quad as "an informal grouping of like-minded countries" and said that the U.S. is already working closely with Seoul on deepening cooperation on many issues. 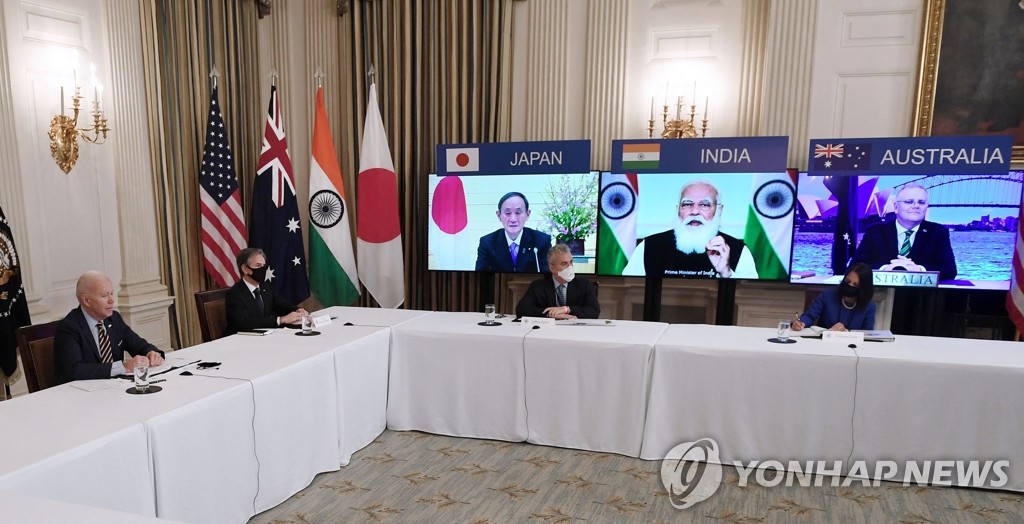