SEOUL, April 8 (Yonhap) -- The turnout for the by-elections Wednesday, deemed a critical bellwether for next year's presidential contest, tentatively reached 55.5 percent, according to the state election body.

Out of the total 12.16 eligible voters, 6.74 million cast their ballots at 3,459 polling stations across the country, the National Election Commission (NEC) said after voting stations closed at 8 p.m.

A total of 21 regional public posts, including two mayoral seats in Seoul and Busan -- are up for grabs in the elections. Also among the posts are the county governor for Uiryeong in South Gyeongsang Province and a ward office head in the southeastern city of Ulsan. 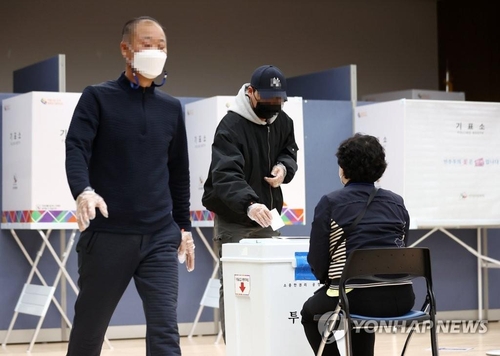 The 55.5 percent included the result of the two-day early voting which finished Saturday with a record-high turnout of 20.54 percent.

Wednesday's turnout, however, marked the first time ever for a by-election that included races for heads of metropolitan governments to reach over 50 percent.

For the Seoul mayoral election with 8.4 million eligible voters, the turnout was 58.2 percent while the corresponding rate for the Busan mayoral race was 52.7 percent.

In the capital, the turnout rate was the highest in the Gangnam area south of the Han River. Many people in the affluent districts of Gangnam, Seocho and Songpa are in an uproar over sharp hikes in property taxes under the Moon Jae-in administration. The turnout rates in all the three wards were 61 percent or over.

The figures came in at 40.5 percent and 69.5 percent in Ulsan and Uiryeong, respectively.

The NEC plans to announce the complete turnout figure after finishing the entire ballot count on Thursday.