SEOUL, April 7 (Yonhap) -- North Korea has moved a submersible missile test stand barge at a shipyard on its east coast, a U.S. think tank said Wednesday, noting the move could be part of preparations for a submarine launched ballistic missile (SLBM) test or for maintenance.

Citing satellite imagery collected Tuesday, Beyond Parallel, a project of the Center for Strategic and International Studies think tank, revealed the activity, warning the "implied threat" of SLBM testing would pose "significant challenges" to both Seoul and Washington.

The barge located at the Sinpo South Shipyard has left the secure boat basin to the floating dry dock, but it does not indicate an imminent missile test given that no missile canister was visible onboard the barge, the think tank said.

"Probable reasons for this movement include: preparations for a forthcoming submarine launched ballistic missile test. Movement of the test stand for maintenance, repairs or installation of equipment," it said.

"The movement of the test stand barge, and the implied threat of renewed SLBM testing (potentially of a Pukkuksong-4 or -5), would present significant challenges to the new U.S. administration of President Biden and the administration of South Korean President Moon," it added.

The activity at the shipyard came after North Korea said it would not participate in the Tokyo Olympics slated to open in July, dashing fading hopes for the resumption of dialogue with Pyongyang at the sporting event. 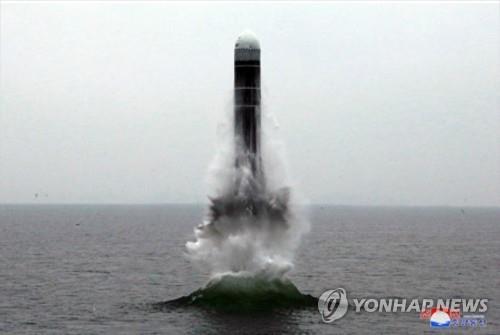