Gen. Claudio Graziano, chairman of the EU Military Committee, visited South Korea at the invitation of the country's Joint Chiefs of Staff (JCS). The committee consists of the military chiefs of the 27 EU member countries. 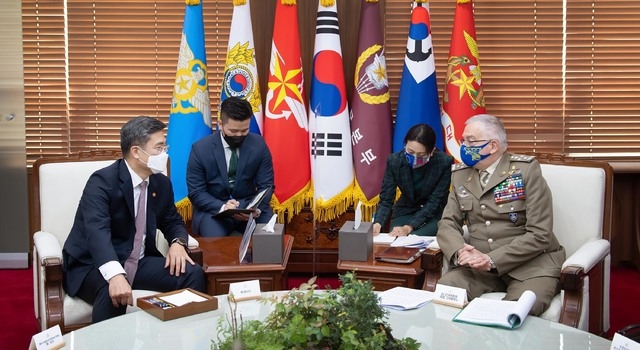 During the meeting with Suh, Graziano voiced support for Seoul's peace efforts with North Korea and agreed to share the EU's Indo-Pacific strategies as soon as they are drawn up and discuss specific ways to cooperate, according to the ministry.

Suh stressed the significance of multilateral cooperation amid fast-changing international security circumstances and asked for the EU's active participation in the upcoming Seoul Defense Dialogue and U.N. Peacekeeping Ministerial Conference, both hosted by the Seoul government.

"The two sides agreed to work closely to respond to changing security circumstances in an effective manner by sharing experiences in maritime security, anti-terrorism and cybersecurity realms," the ministry said in a release.

Earlier in the day, Graziano met with JCS Chairman Gen. Won In-choul and discussed the security situation of the Korean Peninsula.

Won asked for the EU's continued support for Seoul's efforts to denuclearize the peninsula and to establish a permanent peace, and Graziano suggested "promoting the strategic partnership through consistent military cooperation," the JCS said.