SEOUL, April 10 (Yonhap) -- The South Korean government has issued revised guidelines on handwritten entry logs required at small businesses like restaurants for contact tracing purposes, as part of efforts to boost the use of encrypted personal numbers.

In February, the government rolled out the encrypted data service to better protect privacy, but it has been slow to take off, in part due to lack of public awareness campaigns.

The revised guidelines, released earlier this week, strongly recommend that people use their encrypted individual numbers, not their personal phone numbers, for visits to widely used business establishments, public offices and community centers. Businesses are allowed to skip identity checks on patrons to safeguard privacy.

The format of manual entry logs has been changed accordingly, demanding an encrypted personal number and allowing a personal phone number only as an alternative. The changed form can be downloaded on the websites of the Korea Disease Control and Prevention Agency and provincial governments for wider distribution. 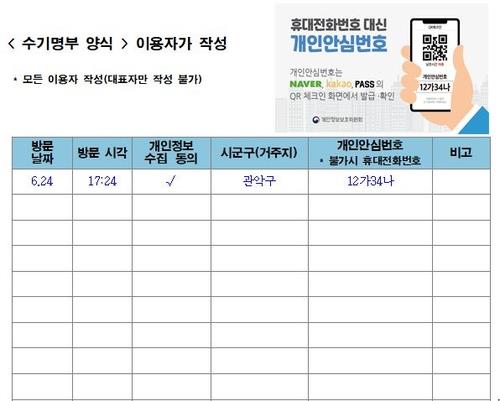 The encrypted personal number, consisting of a combination of four numbers and two letters, can not be used for phone calls or text messaging and can be converted by authorities only when there is an urgent need to contact the holder of the number for virus-related reasons.

One can get his or her unique encrypted number on the QR code generating page of Naver, the country's biggest portal site, the popular messaging service KakaoTalk or the authentication application PASS. And the number will remain unchanged and valid until the end of the COVID-19 pandemic. 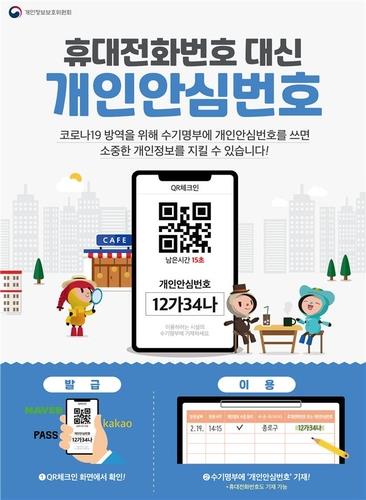 High-risk facilities and most business establishments, like cinemas, cafes and restaurants, have required visitors to submit either a QR-code based entry log or a handwritten one for quick tracing of possible contacts of confirmed COVID-19 patients.

Privacy concerns had been raised with the latter, as people were required to log their personal information, including a phone number, often on the same sheet of paper.

Information gathered through smartphone QR codes was found to be safe, as it is automatically deleted after four weeks.

"When people start to use their personalized safe number on a daily basis, concerns about the leakage of private information will naturally go away," Song Sang-hun from the Personal Information Protection Commission said.