SEOUL, April 11 (Yonhap) -- A man has been sentenced to six years in prison for selling marijuana he smuggled in from the United States using an unmanned parcel locker, judicial sources said Sunday.

According to the sources, the Seoul Central District Court recently handed down the prison term to a 29-year-old man, whose identity has been withheld, on charges of violating the Narcotics Act.

He is accused of buying marijuana from U.S.-based drug dealers he met on the dark web, an area of the internet that is not accessible through regular search engines and selling some of it.

The dealers hid the cannabis, which is classified as an illegal drug in South Korea, in shampoo bottles and shipped them internationally to an unmanned parcel locker here, according to the prosecution.

Prosecutors charged the man with buying a total of 600 grams of marijuana over three occasions in 2019, although police said they seized more than 1 kilogram of the drug when they apprehended him. 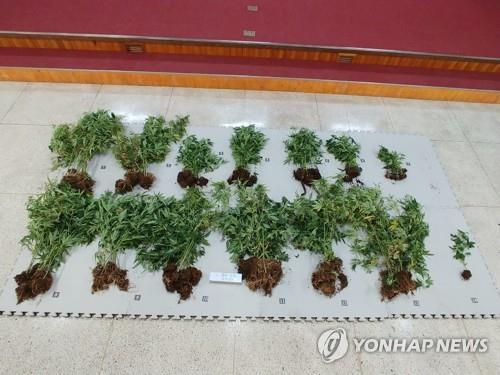 During a court hearing, the 29-year-old argued that he had no intentions of selling the drugs and only planned to use them for himself, though it was dismissed.

"It is difficult to view him as regretting his actions, based on his claims during the investigation that he did not know the parcels came from abroad or that they contained marijuana," the court said, adding that it took various factors into consideration in the sentencing, including the fact that he only raised 4.5 million won (US$4,030) from selling the drugs.

In August 2019, the same man was sentenced to two years in prison, suspended for three years, in a separate case involving the same charge.

Man sentenced to 6 years in prison for trafficking marijuana

Man sentenced to 6 years in prison for trafficking marijuana