The ship, with its captain and 12 other crew members aboard, left the port near Bandar Abbas on the southern coast, at around 6 a.m. (Iran time), the ministry said. The crew members had been released earlier but have remained on the ship for maintenance purposes.

The release came amid speculation that Seoul and Tehran might have made headway in addressing the Middle Eastern country's call to unlock the funds, although neither side has acknowledged that the ship seizure and the frozen funds are related.

Using the money to pay off Iran's U.N. dues in arrears has also been among the payment methods being discussed.

"We're expecting to make a considerable progress in terms of paying the U.N. dues," a foreign ministry official said. "We have also exported some $30 million worth of medical equipment since we resumed the humanitarian trade with Iran last April."

Seoul has also closely consulted about the frozen funds with the U.S. and European partners, the countries that are undergoing negotiations with Tehran to restore a 2015 nuclear deal aimed at limiting Iran's nuclear activities, the official added.

"If the JCPOA talks move forward, we think that it could have a positive effect on the frozen funds issue," he said.

Meanwhile, the ship's release was decided after the Iranian authorities and the vessel's Korean operator reached a settlement. Tehran had never begun any legal proceedings against the ship, according to the official. 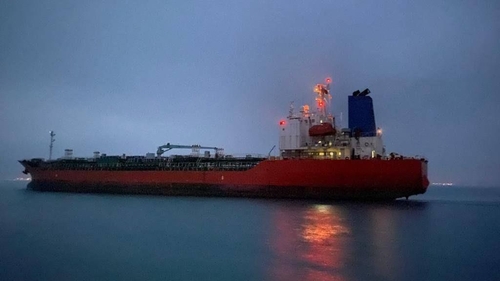