SEOUL, April 9 (Yonhap) -- Five young lawmakers of the Democratic Party said Friday that their party's campaign for prosecution reform may have failed to win public consensus, possibly leading to its devastating defeats in this week's mayoral by-elections in Seoul and Busan.

The five lawmakers -- Reps. Oh Yeong-hwan, Lee So-young, Jang Kyung-tae, Jang Chul-min and Jeon Yong-gi -- made the critical remarks on the party's yearlong drive to weaken the power of the prosecution while reflecting on the causes of its election defeats during a news conference at the National Assembly. 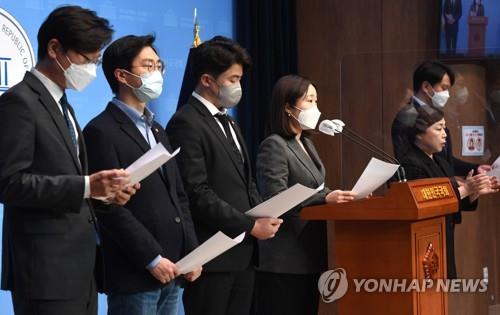 As part of its prosecution reform, the ruling party is pushing to set up a new agency under the Ministry of Justice to take away the prosecution's investigative authority over six serious crimes, including corruption and economic crime cases.

Yoon Seok-youl resigned as prosecutor general in March after denouncing the reform move as violating "the spirit of the Constitution."

The five lawmakers, all in their 20s and 30s, said that they once thought of Cho Kuk, the controversial former justice minister, as the champion of prosecution reform but that such an attitude may have angered and divided the public.

"Prosecution reform was a policy supported by many people but has lost the consensus of the public due to the conflict between (former Justice Minister) Choo Mi-ae and Yoon," they said.

They also took issue with the party leadership's decision to field candidates for the mayoral by-elections, though the two mayoral seats were vacated due to alleged sexual offenses by Democratic Party members.

"Candidates were fielded after revision of the party's constitution, and there were not any proper apologies to the sexual offense victims. We admit that the cause of the election defeat lies in the misjudgment and miscalculation of the Democratic Party," they said.

The young lawmakers also vowed to act as the party's main force to better represent the voices of the people.