During his three-day visit that ends Tuesday, Chung is expected to discuss ways to enhance the Seoul-Tehran relations and other matters. The visit marks the first such trip by a South Korean premier in 44 years.

The visit came two days after the Iranian government released a Korean oil tanker and its captain who were detained over alleged oil pollution.

The detainment was widely seen as Teheran's retaliation against South Korea's seizure of some US$7 billion Iranian funds in early January, related to the U.S. nuclear sanctions on Iran.

Upon his arrival in Iran, Chung is scheduled to talk with Iranian first Vice President Eshaq Jahangiri. He is also set to meet with Mohammad Bagher Ghalibaf, the Iranian parliamentary speaker, and Ali Larijani, the adviser of Iranian Supreme Leader Ayatollah Ali Khamenei.

A meeting with Iranian President Hassan Rouhani is also being arranged, according to Chung's office.

In addition, Chung is scheduled to meet with officials of South Korean companies operating in Iran, including Samsung Electronics, LG Electronics Inc. and SK Networks Co. 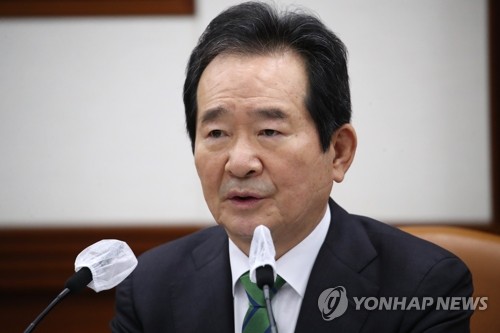