SEOUL, April 11 (Yonhap) -- The music video for a remix of the 2017 BTS hit "MIC Drop" has earned 900 million views on YouTube, becoming the group's fifth song to reach the milestone, its agency said Sunday.

YouTube views for the "MIC Drop" remix, uploaded in November 2017, reached the milestone at around 9:21 a.m. Sunday, according to Big Hit Music.

The record was reached only three days after the K-pop superstar's "Fake Love," the main track for the seven-piece act's third full album "Love Yourself: Tear," topped 900 million views on YouTube.

"MIC Drop" is a track that was originally included in the BTS album "LOVE YOURSELF: Her" that dropped in September 2017. Two months later, a remix by American DJ and producer Steve Aoki was released. 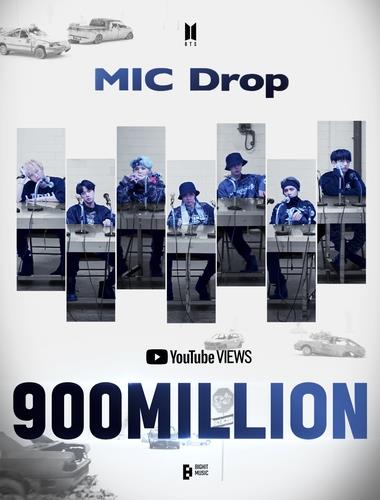