SEOUL, April 12 (Yonhap) -- Nearly 2,000 employees at a state housing developer have signed contracts for public housing provided by their own company over the last 10 years, data showed Monday.

According to the document that Rep. Kwon Young-se of the opposition People Power Party received from Korea Land and Housing Corp. (LH), 1,900 workers at the company signed such contracts from 2011 to 2020.

The company is at the center of the ongoing government-led investigation into alleged land speculation involving its workers. Since it broke out in early March, the scandal has spilled into other public agencies, with hundreds of public servants, including several sitting lawmakers, under investigation for speculative real estate transactions using classified information. 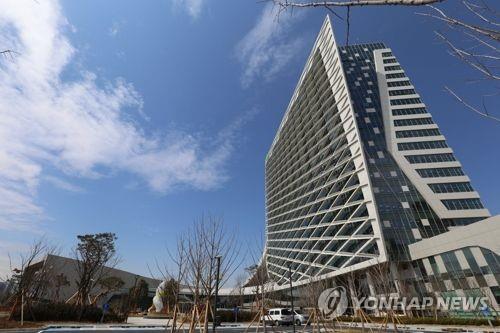 Public housing, including long-term rental houses, is usually built to supply affordable homes for those in need, such as low-income families, newlyweds, households with many dependents and those who meet certain criteria.

Of the 1,621 public housing units bought by LH workers, for example, 503 cases were found to be in Jinju, about 435 kilometers southeast of Seoul, where the LH headquarters are located, and 158 cases were in the administrative capital of Sejong.

The company said that it found no illegality in those contracts and that the employees who had bought or rented LH housing were all eligible.

But some activists pointed out that the sheer number of such contracts raised questions about whether the process has been fair. As of 2016, the number of LH employees was around 6,000.

"The chance is ridiculously high (for LH workers) compared with the chance for ordinary people," Kim Heon-dong, an activist from the Citizens' Coalition for Economic Justice, said, adding that the number could only go up when counting the contracts hidden under other people's names.

Rep. Kwon said the findings showed "pervasive moral hazard among LH employees" and that "urgent measures are needed" to tighten discipline among them and to root out conflict of interests.